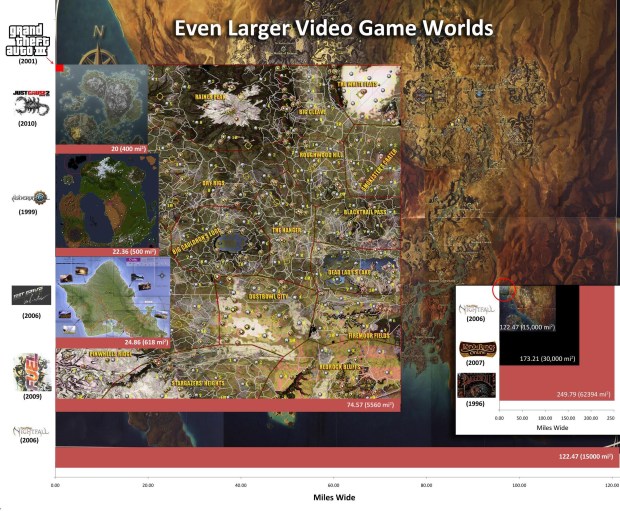 You probably saw that picture going around yesterday that showed have Just Cause 2 to have a bigger game world than many other popular sandbox games. Well, it seems that some gamers didn’t take kindly to having their favorite franchises neglected in this virtual geographic survey, and after some discussion have put together a map that shows how Just Cause 2 is itself is dwarfed by, for example, Fuel. And it’s a mere speck when compared with Daggerfall, part of the Elder Scrolls series.

And then you have the space simulators like X3 and EVE Online, which, taking place as they do in space, have somewhat of an advantage over the land-based genres. But the real question really isn’t one of raw space so much as the actual size of the game world. While you may traverse hundreds or even millions of miles in MMORPGs and space simulators, the bulk of that terrain is practically empty. Compare this to, say, Grand Theft Auto 4, where every block is packed with detail and personality, although the game area is technically limited to perhaps 10 square miles.

I expect this won’t be the last of these maps to come out, for certainly some joker will place these enormous maps on even more enormous map of all the universe, as represented in Homeworld or Elite. And while we’re on the topic of space and scale, now is a good time to remind you of that awesome spaceship chart from a while back. Put them together and you can really put things in perspective.