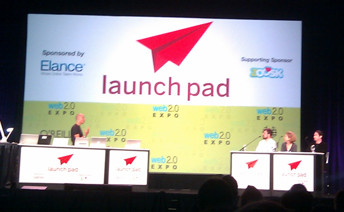 Every year at Web 2.0 Expo, a handful of promising startups are invited on stage to give quick, five-minute pitches to an audience of conference attendees and a panel of judges (you can see our past coverage on these events here and here). Yesterday this year’s batch of startups took the stage, and they didn’t disappoint. My notes on the startups are below.

Each company was judged by Marshall Kirkpatrick of ReadWriteWeb, Ellen Pack of Elance, and Brian Singerman of Founders Fund. Taking the top prize (as judged by the audience) was Rhomobile.

Ask Your Target Market.com
A TC DemoPit company that we’ve previously covered, AskYourTargetMarket gives you a way to cheaply conduct market research using online surveys. The site lets you direct your questions to a target set of users using a number of demographic options (location, gender, etc.). Once you’ve collected your data, you can view it in slick-looking, customizable charts and graphs. The service costs $29.95 for 50 responses, and $97 for 400 responses.
Comments:
Kirkpatrick: I think it’s really interesting.. A part of me wonders about the authenticity of the survey takers.
Pack: Fantastic. As a marketer, I’m excited.
Singerman: There are definitely other players in this space. How are you going to go about acquiring your panelists? Would this be better serviced by something like Facebook?

EnglEasy
EnglEasy is as new as they come — the company was just formed a few days ago at Startup Weekend, a hackathon where groups of entrepreneurs and engineers throw together a project in a weekend long frenzy of coding. EnglEasy is meant to help teach English through gaming — the company already has an Android application that teaches basic vocab words, using some of Android’s built-in speech recognition and text-to-speech to enrich the experience. The company offers analytics on a website, which will be available to parents on a subscription basis. Everything is still pretty rough, but it’s impressive how much the company was able to put together in less than a week.
Comments:
Singerman: How do you see yourself getting distribution? Are you going door-to-door to teachers?
A: Easiest way is through the private schools, as it’s very hard to get into the public school system (though you get broad dist. once you do). We’d like to get into private international schools, but we need to build relationships.
Pack: I’m curious to see if you’d be able to get the private schools to buy these graphical progress reports…
Kirkpatrick: I wonder what ages of children these would be most suitable to. Also, building games that are consistently good is easier said than done.

Pearltrees
Pearltrees, which we’ve previously covered, offers a slick way to visualize web content that you’re interested in, with items represented as a web of movable bubbles (called pearls). The site just launched a feature that lets you take a portion of your bubble-map and embed it on your blog. The site also has a social component.
Comments:
Kirkpatrick: It’s pretty incredible that you’ve built a curation tool that looks like a mind map and has been buzzed about quite a bit. But my question is whether this is something that could be popularized, or if the overhead is too much..

Rhomobile
Rhomobile is a platform for writing and deploying applications across an array of mobile platforms (write once/run everywhere). It currently supports creating applications for iPhone, BlackBerry, Windows, Symbian, and Android, with others in the works. Developers build applications using HTML/JavaScript/VSS/Ruby. The company says it complies with Apple’s developer license, as it generates a local XCode project with Objective C.
Comments:
Pack: Mobile is hot, this is a very compelling use case. Are you compromising anything for increased compatibility?
A: No..but it’s important for us to keep up with all device capabilities as they emerge. We’re getting lots of action from the enterprise, where employers need to keep their workers in the loop.

Strings
Strings launched in February, offering a social tracking and filtering platform that allows users to share and discover things that interest them on the web. The site offers a number of ‘trackers’ that can automatically capture your activity on various popular sites (it’s opt-in). The site uses browser plugins to track this. It looks sort of like Blippy in the sense that it can track your purchases at these select sites. The site’s algorithms are built to find interesting content and eliminate noise.
Comments:
Singerman: This looks good, but what’s the killer app — the app that people use this for initially.
A:The initial launch was focused on sharing. The killer app is the discovery platform.
Pack: What’s the business model?
A: We never sell your data — it’s private. We help you discover things though, and we’re accelerating consumption/driving increased traffic to these partner sites (sounds like they get money through affiliate programs).

Stupeflix
Stupeflix, which we recently covered here, is a web service that lets you quickly generate videos from some basic static content like images and text. Videos can be interactive and updated after they’ve been created. On the backend of the service, users can edit video programmatically; there’s also a rendering API and support for After Effects. This looks quite slick.
Comments:
Pack: This seems really great. I’m curious about the business model.
A: It’s pay per use, much like AWS..