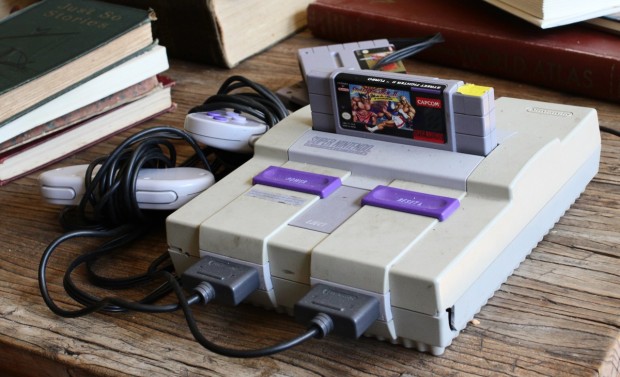 I want to be clear here: I’m not just celebrating the Super Nintendo in general — I do that every day, as should you. I’m celebrating my Super Nintendo in particular. Because for almost 20 years now, this amazing piece of hardware has been my constant companion, and I want to give it the recognition it deserves.

This SNES was originally one my parents had in their office, a design firm where the staff would take play a little F-Zero on their coffee breaks. I inherited it at some point (though I’d travel downtown just to play it) and since then it hasn’t really left my side. It traveled to LA with me for college and was shipped back and forth to Seattle several times, and moved from dorm to dorm to apartment to apartment, until I moved back here. Packed crudely into a paper grocery bag with all the cables and games, it lived below my parents’ TV for a year or so, and then came with me to my first apartment here on Capitol Hill, and then to my present one. It may in fact be the longest-kept object in my possession.

It’s been chewed on by dogs, dropped innumerable times, used as a bookend and a table, crushed at the bottom of boxes, and god knows what else. Several kinds of drink have been spilled on it, and many brands of chips have been crumbled over it. It has pieces missing from the case and I can instantly tell the first player controller by the bite marks.

Through all this, it has never failed to work, even once. I’ve never replaced the controllers, the power cable, the contacts, or the RCA cables. Every game pops up like a champ after you blow on it a bit, and even though I accidentally leave it on for days at a time occasionally, it has never had it go out on me. For nearly two decades — and counting.

If there were a lifetime achievement award for any of the gadgets I’ve used, it would have to go to this thing. Of course, the platform deserves accolades due to its amazing selection of classic games, but this particular one, right here on my living room table, is the one I know and love. C’mere, you.