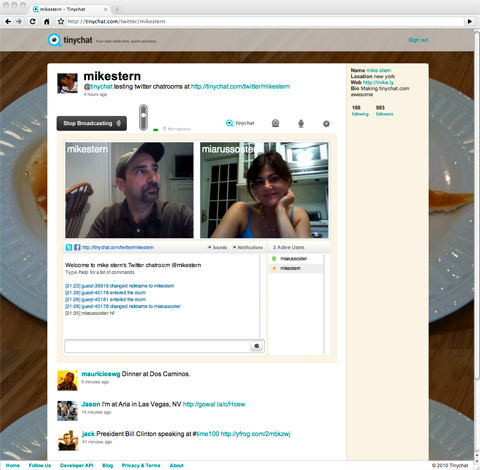 We’re big fans of Tinychat, a web-based chat startup that has been growing like gangbusters and recently won a Crunchie for best bootstrapped startup. Tinychat, which started out as a simple IRC-style chatroom app, has been steadily building out its innovative platform to include video chat and screensharing options, live video streaming, and Facebook Connect.Today, the startup is launching a new video product, Twitter chatrooms.

Twitter Chatrooms are customized Tinychat rooms reserved for every Twitter user. The rooms can only be started by the owner of the Twitter username; they’re built from the Twitter API and use OAuth login.

Tinychat’s co-founder Michael Stern says that the startup will also launch Facebook version in the near future. In terms of actual use of the platform, it could be an interesting option for celebs to hold video chats, and stream them to their Twitter fans.

TinyChat also recently launched a version of Chatroulette, called Tinychat Next. Similar to Chatroulette, you can be thrown into a room with strangers and conduct video chats with random people. When you tire of a person, you can simple move onto the next available user in TinyChat’s “Lobby”.