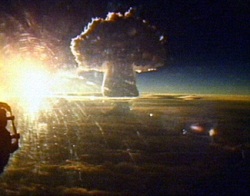 Stop the presses~! The Russians have come up with a pretty snazzy way to deal with that oil spill: nuke it all! Why waste time freaking out when you can unleash the power of mass-to-energy conversion, and let Mr. Atom clean up the mess in no time at all?

The silly thing is, while I’m half-joking, the Russians are legitimately serious about the proposal. Turns out they used to do such a thing—nuke oil spills—back in the days of the Soviet Union.

Komsomoloskaya Pravda, the country’s best-selling daily newspaper (sorta like their USA Today, I guess), suggests that we nuclear bomb the area near the leak, with “the underground explosion mov[ing] the rock, press[ing] on it, and, in essence, squeez[ing] the well’s channel.”

They’ve done such a thing five times in the past, and it turns out that it has an 80 percent success rate.

In short: Russia is awesome.