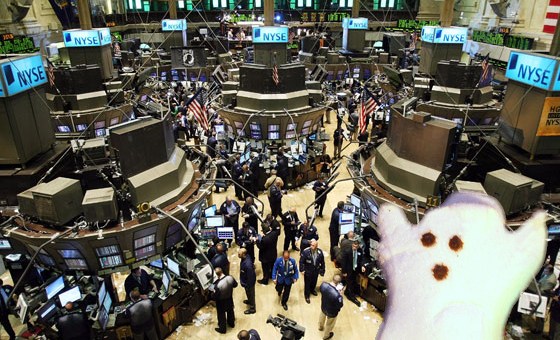 There’s something freaky going on at the New York Stock Exchange. The handheld devices that the stockbrokers use to… do whatever it is they do (I thought they just yelled at each other and bathed in money) had a bit of a mysterious hiccup this morning. About a third of the devices simply stopped working for 45 minutes or so, during which time an eerie wailing was heard and all the televisions went static-y.

Okay, there was no wailing or static, but the devices did stop working for no particular reason. Sure, it’s not headline news, but I’ve always wondered why there aren’t more crazy things like this happening in that high-stakes environment. Like what about spreading the flu on the floor so none of the traders can come in the next day, and then cleaning up with some backroom deals? And how come the NYSE report servers don’t get hacked more often?

It seems that if the traders are using the same brand or type of handheld, they’d be ripe for exploitation. Hmm, I sense a best-selling novel coming on!