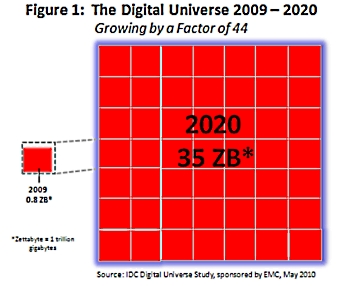 One number that wasn’t affected by the recession was the size of the digital universe, which grew 62% in 2009 to around 800,000 petabytes. However, the petabyte, or 1000 terabytes, is quickly becoming an obsolete unit for measuring the amount of information in the world. To remedy this we will begin to use the zettabyte, or a million petabytes (we skipped the exabyte, or 1000 petabytes). According to IDC, humanity’s total digital output is expected to pass 1.2 zettabytes this year, or 1,200,000,000,000,000,000,000 bytes.

Approximately 70% of the world’s digital content is generated by individuals thanks to the popularity of social networking, online video, mobile phones, and digital photography. Emerging countries like China and India are also becoming significant contributors to this growth due to their enormous demand for and creation of digital content (no, it’s not just bootleg moovies). At these growth rates, the digital universe will be around 35 zettabytes by 2020, or more than 44 times what it is now. Of course at some point these numbers begin to lose their meaning, so just know that the current size of the digital universe would require 75 billion iPads to store and is roughly the equivalent of a century of constant tweeting by everyone on Earth.