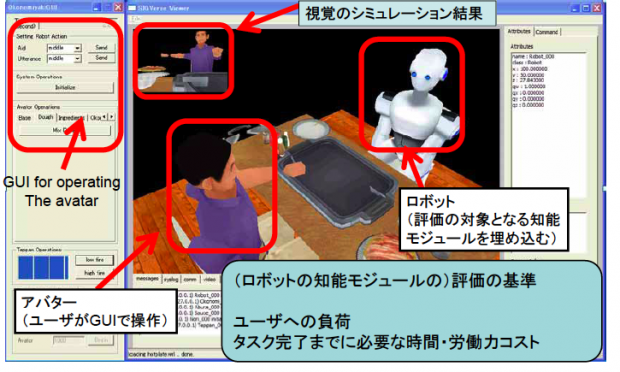 Japan’s National Institute of Informatics (NII) has developed SIGVerse, a piece of software that makes it possible to simulate how human beings and “intelligent” robots cooperate in a virtual space. The goal is to assess how robots can be “trained” to better work together with humans one day – without actually having to build robot prototypes in real life.

SIGVerse is supposedly the first software of its kind. The current version of the simulator system enables a virtual robot and a human being to work on simple tasks, such as baking a savory pancake, together. SIGVerse is supposed to make it easier to study how that robot converses with the human or how it behaves, while a real person can assume the role of the avatar.

For example, a virtual robot that doesn’t talk when being asked a question during the simulation can hardly be called cooperative and thus would need to be reprogrammed (in C++). SIGVerse can also be used to determine non-verbal communication skills, for example by examining how a robot turns its look when interacting with a human.

The NII plans to make SIGVerse available for everybody to use for free soon (it’s completely open-source).