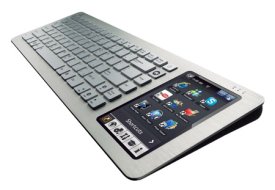 After over a year of delays, promises, and waiting, we finally know what’s going to be in the Eee Keyboard. Has it been too long? Is it too late for the poor keyboard that every wanted, but no one could get? Do we still care? I’ll admit, I like it, but I may be in the minority.

Asus put the Keeeyboard on their site this weekend, with the retail price set at $599. It’s not bad, consider it for what it is and you can see where the trade off is. It comes down to this; the Eee Keyboard is a essentially a netbook in a new form factor, with a touch screen. Right down to the Intel Atom N270 keyboard, 945GE chipset, 1GB of on board memory, and the choice between a 16GB or 32GB SSD. Battery life is around 4 hours (we’ll see). There’s two USB ports, one HDMI port, VGA, gigabit LAN, and headphone and microphone out, all located on the back.

So what do you think? Is the form factor worth the premium? I don’t know, I’d have to have a pretty compelling use to buy one. The touch screen is a great concept as well, but without a “killer app” I don’t see it going far.