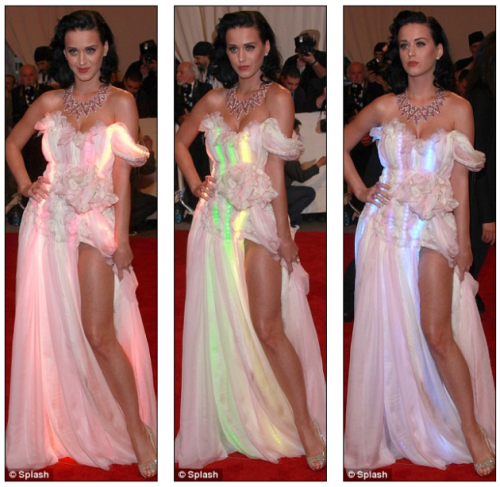 And the winner of best use of LEDs in a dress goes to… Katy Perry!

No, for the issue is that she wore a dress at some fancy even in New York that had built-in LEDs. The dress, designed by, CuteCircuit, lit up as she strutted around the Metropolitan Museum of Art.

CuteCircuit, for the unawares, sells “wearable technology.” In addition to the dress that Perry wore, there’s the Twinkle T-Shirt, which is all filled up with LEDs, and the Kinetic Dress, which “display[s] the wearer’s mood to the audience and creat[es] a magic halo around her.”

Is there, like, a male version of CuteCircuit I’m not aware of? Why can’t I wear a hoodie with glowy-glow LEDs? Instant geek cred.