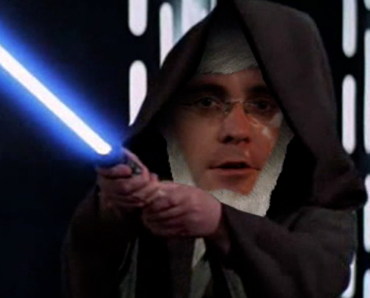 The Force is strong with JibJab. The humor site, which often puts together goofy animated adventures that you can customize with photos of your friends’ faces, has really outdone itself this time: in honor of the 30th anniversary of the release of The Empire Strikes Back, the site has gotten the rights to re-create the original Star Wars Trilogy. Except instead of the familiar faces of Han, Luke, and Leia, you’ll be watching your friends take on the Empire.

There are three clips available — one for each film in the original trilogy. The videos take footage from the original films, condense each into a whirlwind two minutes of wisecracks, and insert your friends’ faces wherever possible. The end result is hilarious.

There’s obviously a big monetization opportunity here, which JibJab is taking advantage of. You’ll be able to create your own clip for The Empire Strikes Back for free, but only paid members will be able to make clips based on A New Hope or Return of the Jedi. We’ve embedded all three clips below, starring some of the TechCrunch writers.

This is by far my favorite JibJab video series, but they’ve had plenty of other good ones. Recent features include the keyboard cat tribute to play off 2009, and the ever-popular Elf yourself.