(This is a review of one of the 7 startups that presented today at Techonomy 2010 in Tel Aviv. To read about the others, browse all posts tagged ‘techonomy’.)

Apparently musician Yoni Bloch is, besides a really nice guy, something of a celebrity here in Israel. He’s also very much a geek, and the combination of both passions led to a startup called Interlude. The central part of the business can be essentially summarized as ‘choose your own adventure’ technology for online videos.

During an interview I had with Bloch and his partner yesterday, and today at Techonomy, they showed off what the technology is capable of by way of a custom-produced interactive music video. Unfortunately, it isn’t online yet, so you’ll have to take my word for it: very impressive.

Basically, every now and then you would get the opportunity to change the course of what happens in the music video, by selecting a person and following their path in a crowded apartment where a party was being held. The beginning and ending are always the same, but there are a total of more than 250 combinations you could put together thanks to the Interlude integration (there were 29 scenes, and it only took one night to shoot the video).

Yes, you’ve seen stuff like that before on YouTube and other video sharing platforms, but Interlude makes the experience of picking a storyline an integral part of the video without interrupting the experience or cutting the audio. Again, you need to see it to get why there’s a wow element here.

They also showed other demos, like a car commercial where you could dynamically choose the color of the car depicted in the video, or a TV show (the Israeli version of American Idol in this case) where you could switch between different singers performing the same song. It’s quite easy to think up other use cases.

In the works: an iPhone and iPad application.

The business model for the startup revolves around licensing the technology to media companies, video production companies, brand advertisers and agencies, in addition to revenue sharing agreements. Key element to convince clients: data that supposedly shows the engagement and time spent interacting with the video content increased up to 3 times on different occasions.

I’m not surprised, and hopefully the fledgling company will soon come out with more material so we can actually show our readers what it’s all about. For now, just believe me when I say there’s apparently much more that can be done in terms of making video content truly interactive.

By the way: the audience voted Interlude best of show, and this in competition with some very impressive startups. 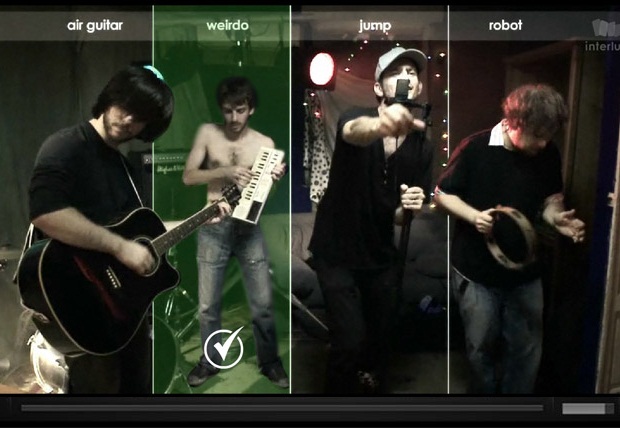