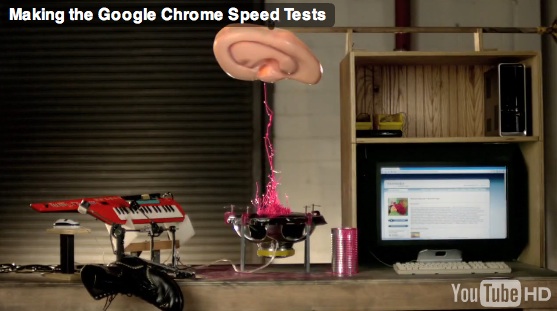 At this point, Google realizes that simply talking about browser speed isn’t enough. They have to show you.

Alongside the latest beta release of Google Chrome, the company has made a series of videos that intend to do just that. The Rube Goldberg-ian setup is fairly amazing. While the speed test videos themselves aren’t out just yet, Google has posted the making of the video (which I’ve embedded below). It’s a must-watch.

These speed tests were filmed at actual web page rendering times. If you’re interested in the technical details, read on!

Equipment used:
– Computer: MacBook Pro laptop with Windows installed
– Monitor – 24″ Asus: We had to replace the standard fluorescent backlight with very large tungsten fixtures to funnel in more light to capture the screen. In addition, we flipped the monitor 180 degrees to eliminate a shadow from the driver board and set the system preferences on the computer to rotate 180 degrees. No special software was used in this process.
– 15MB/s Internet connection.
– Camera: Phantom v640 High Speed Camera at 1920 x 1080, films up to 2700 fps

Again, all of this is simply to highlight just how fast the latest build of Chrome is. And it is fast. Google says the beta release today (version 5) represents the “most significant speed and performance increases to date, with 30% and 35% improvement on the V8 and SunSpider benchmarks over the previous beta channel release.” Even more remarkable, “In fact, looking back in time, Chrome’s performance has improved by as much as 213% and 305% on these two benchmarks since our very first beta.” The first beta release was in September of 2008. Not even 2 years ago.

The new beta build (which works on Windows, Mac, and Linux) also adds some new features. Those include the ability to sync browser preferences, extensions in incognito mode, and a number of HTML5 features such as geolocation, web sockets, and drag-and-drop ability. This is also the first build of Chrome that has Adobe Flash baked-in to make it more stable, and perform better.

That’s all great, but I just want to see these videos. Google says they’ll post them tomorrow — and Google’s Matt Cutts predicts they’ll go viral. Google owns a little site that can help with that.