(This is a review of one of the 7 startups presenting today at Techonomy 2010 in Tel Aviv. To read about the others, browse all posts tagged ‘techonomy’.)

Fiddme, publicly launching in beta today, is a social network for foodies that love to share their ‘food experiences’ with the world, which I think is code for notably good or bad dishes. The service, which comes in the form of both a Web and an iPhone application, lets people share their favorite dishes in restaurants or other places by taking a picture of said food and adding a short caption, where it is being consumed and even recipes.

This can prove to be a fun and valuable service for documenting and sharing specific food recommendations rather than suggestions or reviews of local eateries as a whole.

If that sounds a lot like what Foodspotting is all about, that’s because it’s largely the same offering (Eat.ly is also similar).

That’s not to say there’s no room for both – quite the contrary. Things Fiddme has going for it is the great user experience and design, the location-based approach – it’s like checking in, but based on what you’re eating where – and the viral nature of the whole thing. Fiddme is very visual and enjoyable to use (there’s no learning curve), both on the Web and on the iPhone.

Time will tell if they’ll be able to turn the service into a business, but as far as I’m concerned I think a lot of people are going to like using it. 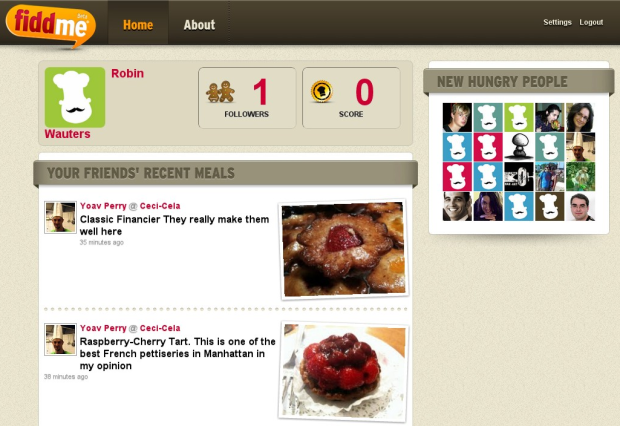