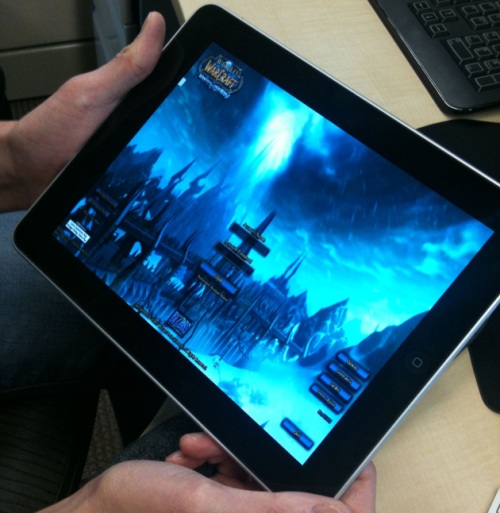 This photo allegedly shows the World of Warcraft login screen running on an iPad thanks to a service called Gaikai. Gaikai, from the looks of it, works like OnLive or OTOY in that it runs the game on their hardware, then streams it to you over the Internet. Sure it does.

The idea is that, who wants to worry about installing gigs and gigs of game data to their hard drive, then have to worry about whether or not your video card is sufficient to play the game? Well, I do, for one, that’s sorta the whole point: I want to be in charge of my gaming setup. I do not want some crazy service in the sky handling my gaming. I want to shop for memory and compare timings, I want to know the thrill of spending $500+ on a video card just for a tiny performance increase, I want to say “WOO!” when new drivers are released.

Gaikai, and services like it, divorce PC gamers from much of the experience of PC gaming.

If if works for you on any kind of level, be my guest, but I don’t think it’s very fun at all.

As for WoW on the iPad, as a concept, my initial reaction was, “Man, that’s going to be tricky to control.” I suppose the action bar could be made touchable, but it’d take a little while to get used to that.