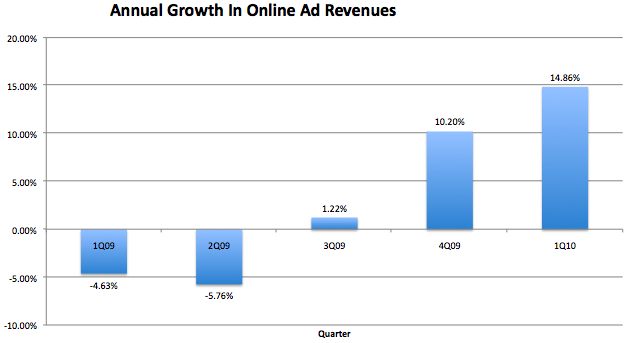 The online advertising industry saw growth accelerate in the first quarter, with the combined advertising revenues of the four largest players (Google, Yahoo, Microsoft, and AOL) jumping almost 15 percent to $8.8 billion. This compares to 10 percent annual growth in the fourth quarter, and negative growth the first two quarters of last year (aka, the Great Advertising Recession of 2009).

Overall growth would have been even stronger if AOL didn’t have such a rough quarter. It was the only one of the four companies to show a decline in advertising revenues, down 19 percent. Google’s ad revenue was up 21.5 percent, Microsoft’s was up 8.8 percent, and Yahoo’s was up 3 percent (although the display portion was up 20 percent). As a result of AOL’s poor showing, the combined $8.8 billion total was down 2.6 percent from the fourth quarter’s $9 billion 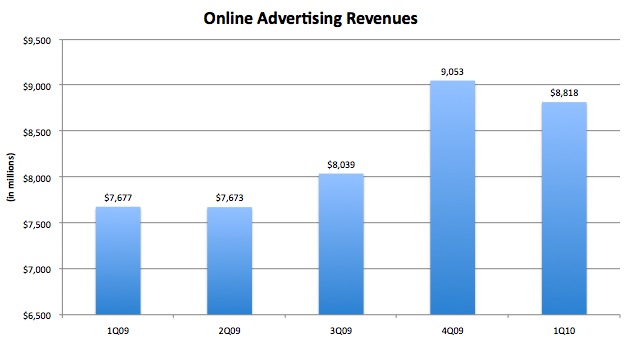 I keep track of these numbers every quarter for these four companies, which turns out to be a good proxy for overall online advertising revenues since they represent a majority of the industry’s revenues. The numbers represent global advertising revenues, and include network revenues paid to affiliates through AdSense and Yahoo’s ad network. Google’s licensing revenues for Google Enterprise Apps have been stripped out. For Microsoft and AOL, I include only the advertising portions of their online revenues as reported in their quarterly earnings statements.

Below is a table with all the numbers: