That sounds a whole lot like YouTube is allowing users to skip having to create a Google account by letting them simply log in with their Facebook accounts, which would be a strange move strategy-wise. As it turns out, it’s simply a case of some questionable wording.

I’m not seeing the banner myself, but a YouTube spokesman says that clicking it will take you to the standard YouTube registration screen, where you fill out your information as usual. Once you’ve done that, your newly created YouTube/Google account will automatically be connected to Facebook via Facebook Connect, so that it pulls in your friends’ shared items. But you aren’t actually logging in using Facebook’s Single Sign-on feature, which is an important distinction.

And YouTube probably won’t be doing that any time soon — Facebook and Google are increasingly fighting over the future of identity on the web; accepting Facebook logins on YouTube would hurt Google’s cause and bring Facebook one step closer to becoming the web’s ubiquitous login standard.

That said, YouTube has been gradually integrating some Facebook Connect features since last summer, beginning with an autoshare feature in June 2009 and more recently allowing users to see what their friends have shared from YouTube to Facebook. In other words, YouTube is embracing Facebook’s sharing functionality, but it isn’t going all the way.

Thanks to Cole Turner for the tip 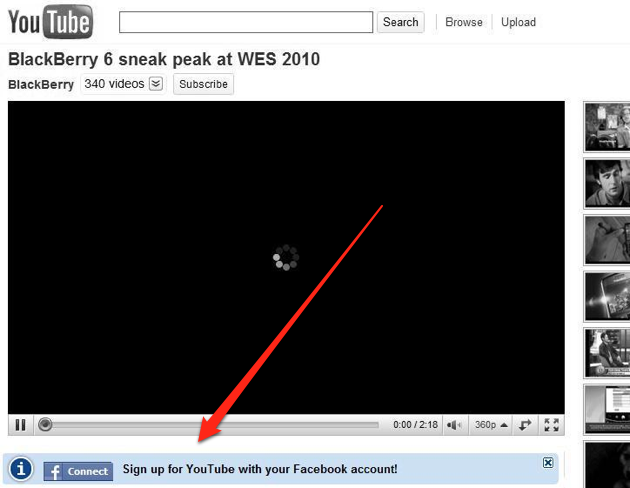