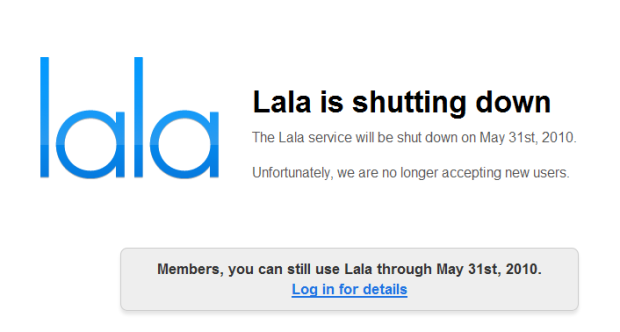 Lala – where music will stop playing …

In a brief message that was just posted on the Lala.com website, Apple has announced that the service will be shut down on May 31st, 2010. Apple will not be accepting new users, and existing users will be able to log in only until the end of next month.

Does this mean we can start raising our hopes for iTunes in the cloud?

At the bottom of a Wall Street Journal piece published back in January 2010, the paper suggested that Apple was gearing up to launch iTunes.com as soon as this June, citing sources familiar with the matter.

For an extensive view on how far-reaching that could prove to be, check out this guest post by Michael Robertson, the former CEO of MP3.com, who laid out Apple’s cloud-based media strategy going forward.

An iTunes-in-the-cloud offering – which is basically what Lala’s value proposition boils down to – is the central part of such an endeavor. Late last year, we wrote about how a move to the cloud was inevitable for iTunes. With the imminent shutdown of Lala, it’s safe to assume something is brewing at Cupertino.

Will Apple be the first company to turn online music subscription services into a sizable business?

Perhaps Apple, which acquired Lala late last year, will be making an announcement at its Worldwide Developers Conference, which will be held June 7 in San Francisco. 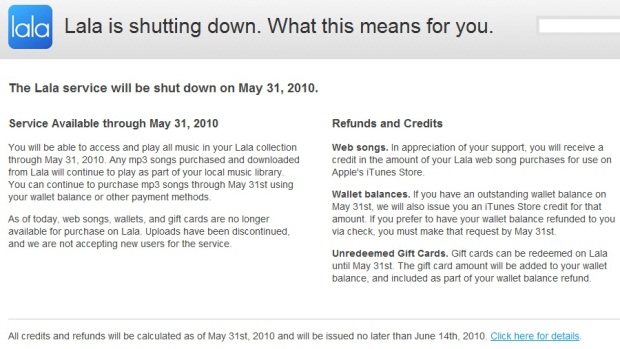 Update 2: and this is the email that was sent out to users:

The Lala service will be shut down on May 31st.

In appreciation of your support over the last five years, you will receive a credit in the amount of your Lala web song purchases for use on Apple’s iTunes Store. If you purchased and downloaded mp3 songs from Lala, those songs will continue to play as part of your local music library.

Remaining wallet balances and unredeemed gift cards will be converted to iTunes Store credit (or can be refunded upon request). Gift cards can be redeemed on Lala until May 31st.

(Thanks for the tip, Josh)