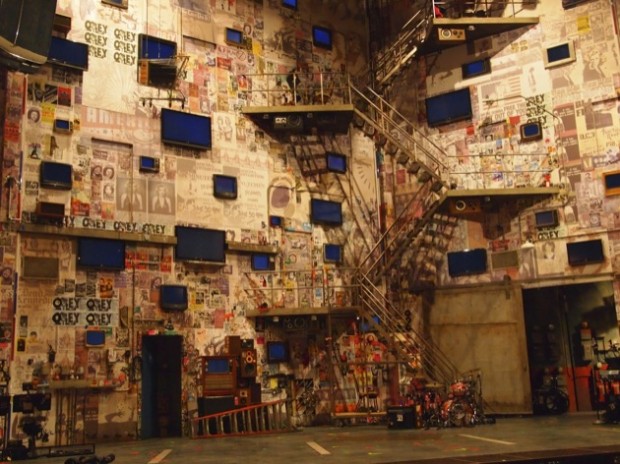 Last week I walked through the set of American Idiot, a new broadway musical featuring the songs of the skiffle band, Green Day. I’m not big on musical theatre – I was never given even a chorus part in high school and ended up doing crew, which was much more fun, so maybe it’s sour grapes – but this musical has 44 different video screens on stage, each doing something different, making it one of the most technically impressive productions on Broadway. I was there to find out how they did it.

The forty-four screens, as you see above, are all Sony Bravia TVs of various sizes. The goal during production was to “sequence” the screens to match the onscreen action. Interestingly, because of union labor guidelines, the TV controls had to be connected to the lightboard using a theatrical networking protocol called DMX512 so the trained lightboard operator – whose training usually stops a the ability to push a slider up and down – would be able to press one button to get all of the TVs to work correctly. Why? If they had to hire a special “TV operator,” the unions would force every production in the future to hire a “TV operator” and given tight budgets, they have to kluge like crazy. It’s the equivalent of controlling a massive network of computers from a green-screen terminal with only a serial port simply because the boss likes his Wang desktop. There’s no business like show business! 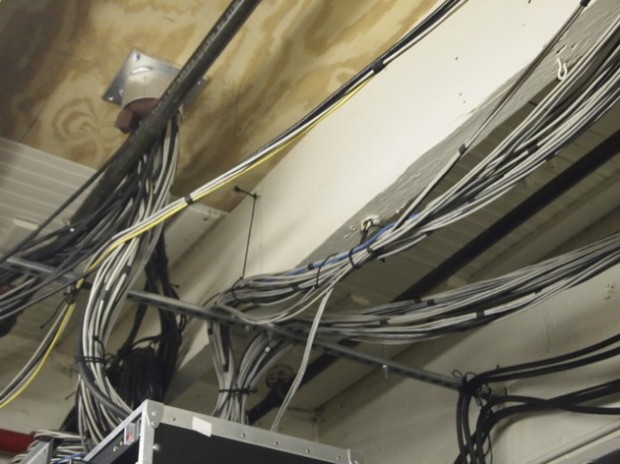 How was it done? The production team installed 11 Hippotizer video processors. These massive machines are dedicated to outputting video. That’s all they do. They can do real-time processing on board and are used mostly for creating huge, public video events. In this case, each Green Hippo output a single image consisting of four discrete feeds, one feed in each corner. They then split those feeds into four separate channels and used a DVI-to-IP transmitter to send the image over Cat-5 to each of the screens where it is then converted and output via HDMI. Three more machines power a massive triple-HD projector set-up that uses three HD projectors situated vertically to create a massive 3x1080p screen. There are also failover systems in case on set of screens dies. 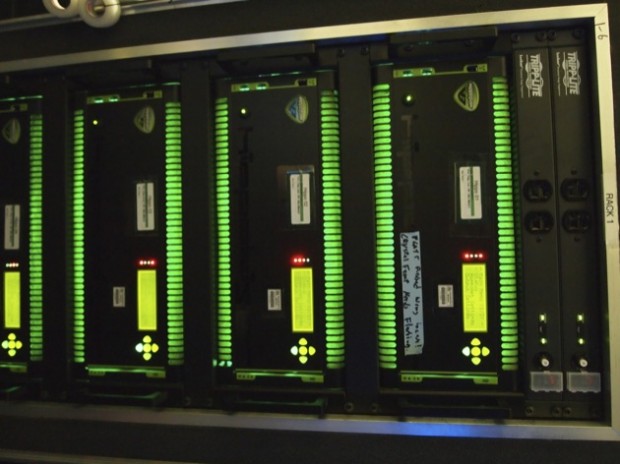 The team originally used off the shelf components during the musical’s first run and found they failed far too often. This set-up – as complex it seems – offers seamless control and ensures that the lightboard guy doesn’t mess anything up.

The shooed me out of the theatre when they started rehearsing the show so I didn’t get a chance to hear the lilting strains of “St. Jimmy” or “Boulevard of Broken Dreams,” but I did get to see some real punk rock – in the small crawlspace under the stage where the real wizards hide out, creating amazing spectacles for tourists from Michigan on vacation in New York.