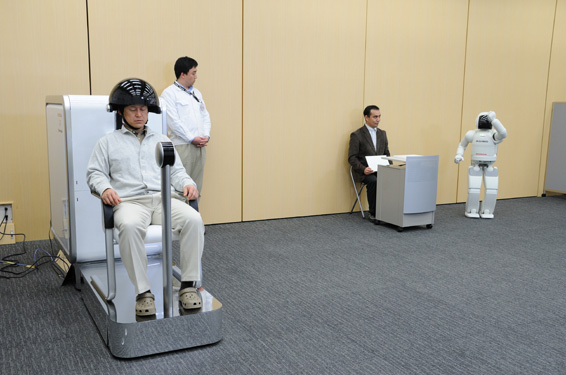 Mind-reading devices are nothing really new, but Japan’s Ministry of Internal Affairs and Communications (MIC) apparently sees a huge potential for that market in the near future. The MIC will join forces with selected private tech companies to develop and commercialize robots and consumer electronics that can be controlled through thought. The project kicks off this fiscal year and is supposed to end by 2020.

The MIC says Japan should use its strength in fields such as brain science and IT to come up with TVs that could be operated without using fingers or cell phones that could send out emails via thought alone, for example. Other potential applications include a car navigation system that automatically displays the nearest restaurants when the driver thinks of having a meal or robots that can come to the rescue when elderly or disabled people are in trouble.

The MIC says it eyes working together with companies such as Toyota, Honda (see picture above) or Hitachi (all of which are experienced in developing brain interface technologies). Partners from the academic sector include Japan’s National Institute of Information and Communications Technology, Osaka University, and the Advanced Telecommunications Research Institute International.