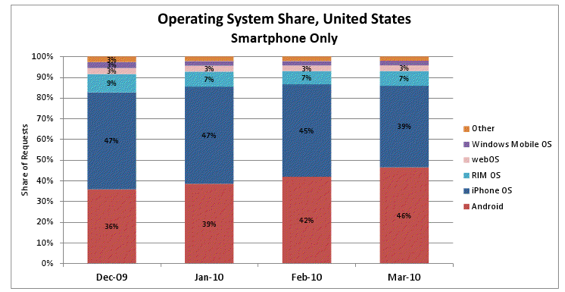 As we noted earlier, mobile ad network AdMob has released its monthly mobile metrics report for March, which takes a close look at Android OS traffic. One interesting stat that was hidden in the report was that Android ad traffic overtook iPhone traffic in the U.S. for the month of March.

The Android ecosystem is steadily growing, with the App market counting 38,000 plus apps as of a few weeks ago, up 8000 apps from a month ago. This still pales in comparison to Apple’s booming App Store, but it seems pretty significant that one of the most popular mobile ad networks is reporting that Android ad traffic has surpassed that of the iPhone. Of course, Admob is still waiting for regulatory approval of its $750 million deal to be acquired by Google, so maybe it doesn’t want to call too much attention to how well Android is doing.