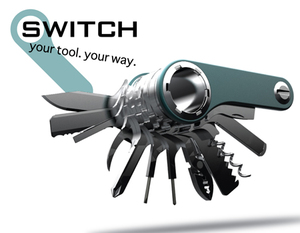 Say you’re going on a picnic and don’t want to bring a huge bulky pocket knife. What would you bring? Maybe a knife, a bottle opener, and a corkscrew. Or say you’re planning on dismembering and eating a baby seal? What would you bring then? Probably the same stuff. But the Switch from Quirky makes picnics and ritual seal dismemberment easy and fun!

The product is a modular knife. You pick the tools, put them together, and snap the attachments shut with a coin or other screwdriver-like accoutrement.

The knife is available for pre-order right now for $68 but it will go up to $79 after the pre-sale. They probably want to sell a critical mass before they go whole hog on production.

This could be an interesting solution for travelling with your multi-tool, as well, because you can take off the blade and just carry the smaller bits.