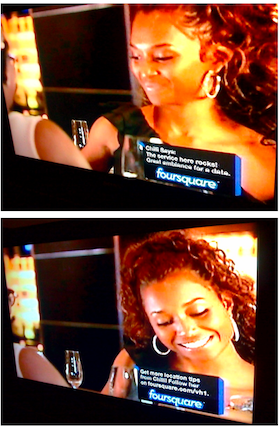 As Foursquare’s business development lead, Tristan Walker tweeted out tonight, VH1 has started promoting Foursquare on screen during some of its shows. For example, in the screen capture grabbed by Walker, you can see a Foursquare bubble that popped up during a show (What Chilli Wants) on the cable channel tonight. “We love the way they’re integrating tips,” Walker notes.

The official VH1 Foursquare account is supposed to be used to “find culture in your city.” What’s interesting is that both VH1 on-air personalities and celebrities with their own shows are supplying these tips to Foursquare. And you really can’t buy better publicity than VH1 putting these Foursquare pop-ups in their shows. In fact, Foursquare undoubtedly isn’t buying this publicity, and in fact, VH1 may even be paying them for the partnership (the service won’t say which of its deals are free and which are paid).

Foursquare just crossed a million users last week, but the deals the young startup is securing are arguably more impressive than their growth. Not only are the History Channel, Bravo, and VH1 promoting them, but even hotels in Vegas are as well.

All of this can’t hurt the valuation Foursquare ends up with when it inevitably does take its next, large round of funding — or sells for upwards of $100 million.