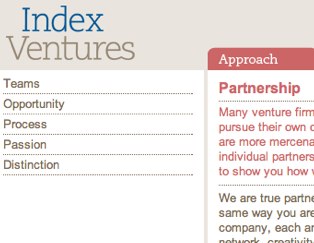 Index Ventures, a European based venture fund that has also invested heavily in U.S. startups, will launch a new seed fund on Monday to focus on early stage deals. Partners Neil Rimer, Danny Rimer, Saul Klein and Mike Volpi will manage Index Seed. The fund is partnering with existing seed fund The Accelerator Group, and TAG founder Robin Klein is joining Index as a venture partner.

The firm plans to make twenty early stage investments over the next 24 months, Klein told me. Investments will range from $50,000 – $1 million in size. And unlike many seed funds that have been carved out of larger venture funds, the partners will take board seats or otherwise be heavily engaged with their startups. With larger venture funds, the partners have time to make the investments but can’t spend a lot of time on them simply because they are managing so much other money. Index Seed is being carved out of Index’s existing $400 million fund.

The decision making process is streamlined, says Klein. “We are optimizing our process for due diligence and legals. We can make decisions quickly, don’t need a board seat, expect rights that are the same as other seed investors and can invest as little as $50k or as much as $1m in a seed round.”

Index already does seed deals occasionally, and Index Seed is a way to structure and organize those efforts. Saul Klein has been actively engaged in promoting young startups through SeedCamp, a startup competition and incubator, and OpenCoffee Club, a entrepreneur networking event that has spread around the world. And the partnership with TAG brings in additional expertise around early stage deals.

Index has done 40 seed stage deals since 1995, says Klein, and 30 of those were in the last 5 years. Those deals include MySQL, Skype, Playfish and RightScale.

TAG is a seed fund run by father and son team Robin Klein and Saul Klein. The fund, which won the Europa award for top European investor, is a co-investor with Index with 14 companies, including Moo, My Heritage, Glasses Direct, OpenX, Stardoll, Moshi Monsters and LoveFilm. Saul Klein works at both funds, and so there is already a lot of overlap. TAG’s exits include Agent Provocateur (3i), Sit Up TV (Virgin Media), Lastminute.com (IPO), Last.fm (CBS) and Dopplr (Nokia). They currently have 44 active investments. TAG will continue to make its own investments – Robin Klein will spend two days a week at Index.

Saul Klein says that Index wants to continue to invest with top angels in Europe and the U.S., and says that those relationships are crucial to bringing in deal flow. He talks about the notion of “fellow travlers” – investors who share Index’s philosophy of active engagement with seed stage teams. “In the nearly 100 or more seed deals, we have collectively done, we have seen time and again how important it is for founders to have not just relevant investors at the seed stage but investors who are accessible, honest and engaged,” says Klein.