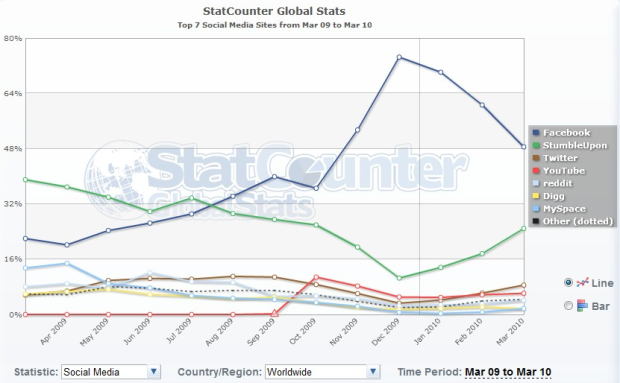 According to StatCounter’s GlobalStats research arm, Twitter now generates almost 10% of social media driven global hits to websites, while Facebook still reigns supreme as the primary source of traffic to global websites with almost half (48%) of ‘Social Media hits’.

Surprisingly, the number two social media traffic generator is not Twitter, but StumbleUpon with almost a quarter (25%). Furthermore, StatCounter claims StumbleUpon was number one ahead of Facebook in the US last month, in terms of traffic generation.

The data for March 2010 is said to be based on 13 billion page views across the global StatCounter network of member sites. The company only recently added social media services to its GlobalStats tool, and notes that its market share appears to fluctuate way more than browser or search statistics.

As you can tell from the graph above (larger version here), Facebook peaked around in the holiday period at the end of the year and is actually losing share fast, although still dominant with roughly half of social media traffic coming from the social network. StumbleUpon and Twitter have enjoyed a similar growth curve since the end of last year, although the former’s growth is clearly accelerating faster in comparison to Twitter.

StumbleUpon’s large share is surprising because it usually flies under the radar when it comes to traffic generation from social services on the Web. Perhaps it owes its high rank to the fact that its main reason of being is having users discover third-party websites, while Twitter and Facebook are not only about sharing links but also status, location and activity updates as well as media like photos and videos.

Then again, Digg didn’t even make it to the top 5 in StatCounter’s research.

Update: commenters have suggested that StatCounter is under-counting Twitter’s share because of the plethora of third-party clients out there. We’re well aware of this and have requested StatCounter to clarify how they measure referring sites – so far we haven’t heard back.

On a sidenote: in June 2009, we posted a statistical breakdown of where our traffic comes from (not limited to social media sites).