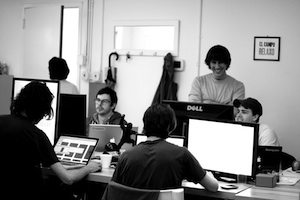 There is a lot of action surrounding Foursquare right now. And CEO and co-founder Dennis Crowley has a tough decision to make.

It’s already been widely reported that Yahoo is seriously pursuing a Foursquare acquisition, but now we’re hearing that at least two other companies are in talks or have been in talks recently with the location-based startup as well. And they’re big ones: Facebook and Microsoft. Facebook, from what we’re hearing, has been talking to Foursquare about a range of possibilities in recent weeks, but seems to have cooled on the idea of an outright acquisition. Microsoft, meanwhile, is likely still thinking about buying the company, according to sources.

While we’ve already made the case for why Foursquare shouldn’t shouldn’t sell to Yahoo, these other two players offer other interesting options. And, with multiple bidders, the price is undoubtedly going up, probably north of $100 million. One may make an offer that Crowley can’t refuse.

“Dennis is seriously considering his options,” says one source about these new bidders. That would seem obvious, but remember that Crowley has already sold one startup (Dodgeball) to a big player (Google) and it left a bad aftertaste in his mouth. Following that acquisition, he (and co-founder Alex Rainert, who just joined Foursquare) left Google in somewhat of a huff. And that’s probably the only reason that Google isn’t also in the running for the hot startup as well right now.

And Crowley does have options. There are also no shortage of people just waiting to put money into Foursquare. Last month, we heard that four VC firms, Accel Partners, Andreessen Horowitz, Khosla Ventures and Redpoint Ventures were all in the running to be the lead investor in a new round of funding for Foursquare. A few days ago, BoomTown reported that Andreessen Horowitz backed out. We’re now hearing that Redpoint may be out as well. But BoomTown also noted recently that Russian firm Digital Sky Technologies (which has pumped a ton of money into Facebook and Zynga) is trying to invest as well. We’ve heard the same thing.

The round, if taken, would probably total $10 million and could value the company around $60 or $70 million. Previously, Foursquare raised a $1.35 million round.

So why not sell? Well, aside from the bad experience Crowley had selling to a big company, Foursquare has been seeing quite a bit of success recently. While the company isn’t yet profitable, it is already making revenue off of some of its partnership deals. And new deals are seemingly being signed on a daily basis. Also, a strong surge of new users post-SXSW helped the service hit 1 million users today. And businesses are signing up quickly using its newly released tools.

Foursquare certainly could also opt to take some money off the table in a new round of funding, that would allow its employees to make some money without selling the company.

So why sell? Well, there’s no shortage of thought that Foursquare’s success may be fleeting. Many think that when Facebook does inevitably enter the location space, it will be game-over for many of these services specializing in check-ins. But based on what we’re hearing, that may not be true.

Many people wondered why Facebook didn’t announce any location features yesterday at f8, but as we noted the night before the event, their location plans likely aren’t finalized yet, and they’ve been experimenting with a lot of different things. That includes federating check-ins from services such as Foursquare and Gowalla. As Inside Facebook dug up yesterday in Facebook’s new protocols documentation, its looks like Facebook will be open to accepting location data from other sources. So while they’ve talked to companies like Loopt and Foursquare about possible acquisitions, it would seem that this federation model is what they’re going to stick with for now.

Foursquare and Facebook have also been talking about other types of arrangements, perhaps broader partnerships, according to people familiar with such talks. If that’s the case, maybe Crowley would be crazy to sell to the likes of Yahoo or Microsoft now. If he could leverage the nearly 500 million Facebook users rather than be stomped by them, his service can probably grow even faster.

But, another source believes that Crowley is leaning towards selling. “Who wouldn’t be? 12 months = $100 million. Assume he had 50% when they started and you’re probably talking $20 million plus for him personally. Not a bad yearly bonus.” Indeed.