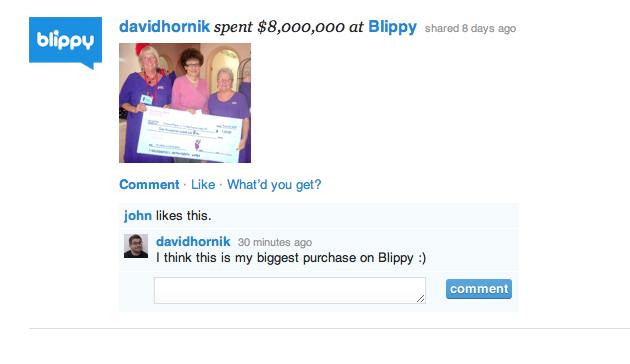 As we first reported last month, Blippy has raised another round of funding. Following the initial $1.6 million angel round in January, the controversial service has just raised another $11.2 million.

As we expected, the latest round was led by August Capital and partner David Hornik will join Blippy’s board. Humorously, Hornik shared his investment on Blippy itself, so we know he put in about $8 million 8 days ago (it was hidden until just now). “I think this is my biggest purchase on Blippy,” Hornik quipped. The rest of the money is from Charles River Ventures, which had led the angel round.

So what’s the plan for the new money? “Expanding our services, doing marketing, and closing some large business development deals,” co-founder Philip Kaplan tells us. Currently, Blippy has 10 employees.

Since the service launched in December, it has been a lightning rod for controversy. In a world where some people are hesitant to check-in at places using location services, the idea of posting credit card transactions truly terrifies some. But others seem to love the service, including some retailers. And clearly, investors love it too.