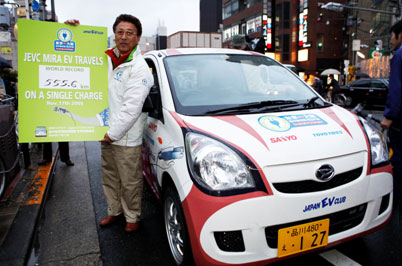 One of the biggest obstacles that prevents electric cars and other vehicles from becoming mainstream is the insufficient battery life. In most cases, potential buyers of those green vehicles are scared off by the fact that there still aren’t enough charging stations out there or that the travel distance (on a single charge) is just too short.

But many companies are working on the battery problem, and one of them apparently is Sanyo. Today the company issued a press release in which it claims one of its lithium-ion battery “systems” helped an electric vehicle to drive exactly 555.6km (345 miles) from Tokyo to Osaka – on a single charge. The car in question is a special version of the Daihatsu Mira (whose non-electric original is widely considered to be “green”, too).

Sanyo says they used a total of 8,320 cylindrical lithium-ion batteries, which the company usually sells to laptop makers and such, to power the vehicle. The Mira actually drove those 555.6km back in November last year, but it took Guinness World Records a while to officially recognize the journey as the longest ever for an e-car.