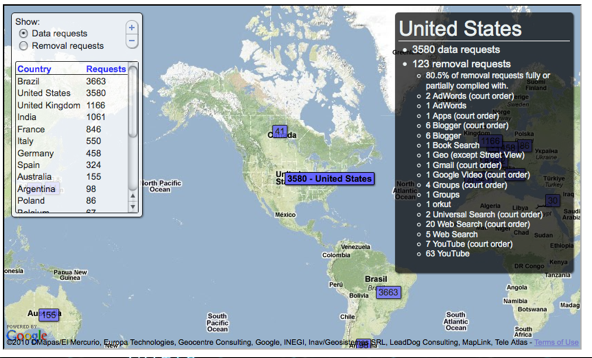 As countries around the world rally against Google to build more privacy protections around the search giant’s services, the company is ramping up its efforts to provide greater insight about the requests the company receives from governments around the world. In an effort of providing greater transparency in its government affairs, Google is today unveiling a new tool that allows you to see which government agencies around the world have requested Google to remove content from its products or services. The tool maps both removal requests and requests for additional information or data involving a service. Removal requests ask for removal of content from Google search results or from another Google product, including YouTube whereas data requests ask for information about Google user accounts or products.

The current map uses data from July to December 2009, with Google updating the data in 6-month increments. In the post, Google issues a disclaimer that the data may not be 100 percent accurate. For example, a single request may ask for the removal of more than one URL or for the disclosure of information for multiple users.

Yesterday, Google announced that its products are being blocked in 25 out of the 100 countries in which the company offers its services, but declined to name which countries are blocking Google products. If Google is now going to show government requests, where’s the list of countries that block services?