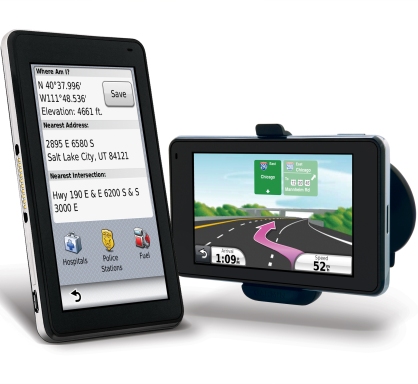 I think the standalone GPS device is all but dead – I’m a pessimist that way and I know that your parents and mine both use standalone GPSes but that’s because we never showed them how to use the ones on their phones – but Garmin is still churning out some nice-looking models.

The members of the new 3700 series, consisting of the nüvi 3790T, nüvi 3760T and nüvi 3750, have multi-touch gestures as well as better speakers. The 3790T, the big daddy in this little dystopian GPS underworld, has:

With a customizable “wake-up phrase” to initiate voice-activated navigation, nüvi 3790T lets you tell it what to do and where to go while you keep your hands on the wheel and your eyes on the road.
• And the road ahead never looked so realistic, thanks to the unprecedented details of 3D terrain and 3D buildings. Whether you’re heading for rolling hills or urban canyons, the shaded topography and realistic landmarks provide unrivaled context and enhanced situational awareness.

Best of all, the devices also have a “predicted destination” system called MyTrends. The device looks at where you tend to be and then starts looking only in those areas unless you tell it otherwise. In this way it can predict where you’re going and, in the end, take you there without you knowing it.