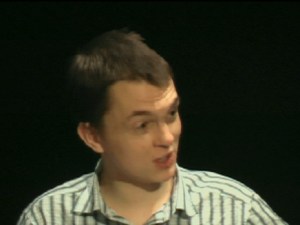 For a variety of reasons, too complicated to explain in this short intro paragraph, there’s no NSFW column from me this week. All will be revealed soon, but suffice it to say that any or all of the following are involved: 1) a semi-secret project 2) an unexpected career turn 3) the future of media 4) a plume of volcanic ash from Iceland.

What’s important, though, is that I don’t want this space to lie empty for the week. So how fortunate that on Tuesday Andrey Ternovskiy from Chatroulette stopped by the office to say hello. And in keeping with the new TC policy of pointing a camera at all of our visitors, I bullied him into a video interview.

Andrey, as you probably know, is from Moscow. And despite the fact that his English is far better than my Russian, his accent – coupled with my ineptitude as an interviewer – did not make for the most gripping viewing. However, there is one clip that stands out, both in clarity and in providing an insight into Andrey’s future strategy for Chatroulette. It came just after I asked Andrey what new features he was planning to add to the service using all the VC money he’s allegedly in town to raise…

As he explains in the video, Andrey is worried that when people meet on Chatroulette they frequently decide to keep in touch by exchanging Facebook or Skype details. This is something Andrey wants to discourage, preferring instead to add that functionality to Chatroulette. I asked him to clarify whether he means adding features that will make it easier for users to connect through third party services, or whether he literally means he wants to stop users leaving the site at all – preferring, Veruca Salt style – to keep them all for himself. Andrey was clear: “I don’t like connecting third parties” he said, citing the fact that many Chatroulette users would like to keep in touch with their new friends while retaining the anonymity the service affords them.

Given the general Silicon Valley obsession with openness and the decentralisation of the social graph, Andrey’s plan to build walls and lock users in, ostensibly for their own protection, seems odd. Even, one might even say, Soviet. It’ll be interesting to see if VCs in the Valley agree.

Another thing that stuck me as I spoke to Andrey was how similar his story sounds to that of an old friend of mine, Alex Tew. Alex, for those with short memories, was the kid who – while still at university – built the Million Dollar Homepage, and in doing so was feted as the web’s biggest marketing genius. VC’s courted him, media outlets around the world profiled him – but like all child stars, the fame was short lived and Alex soon has to return to the realities of running his business and figuring out what to do next.

Given the parallels, I couldn’t resist calling Alex on Skype and asking him, firstly, whether he thought Chatroulette would prove to be a sustainable business and, if so, how – especially given that the site is basically “a sex crime waiting to happen”. Here’s what he had to say…

I still think the Million Dollar Homepenis idea is a winner.