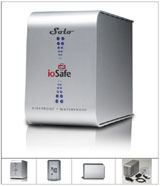 Do you live at the heart of the sun? Maybe under an active volcano? Or under water? Then you need an ioSafe 500GB super duper drive. These monsters, if you recall, can take quite a beating, surviving backhoes, fire, and water.

So what can you guys get? How about one of two 500GB ioSafe hard drives. How do you win? Glad you asked!

Pop over to ioSafe, check out the specs, and then come back and email contest@crunchgear.com filling in the blanks in the statements below