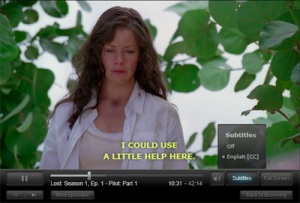 There’s always been a few annoying little issues left to be addressed on Netflix Instant viewing. I mean, you can’t get 1080p, there’s not 5.1 sound, and most importantly, there’s no subtitles. As someone who has family members with hearing disabilities, I’ve been keenly aware that Netflix has been lacking in that regard. There’s good news though, Netflix has been working on that particular issue, and just started rolling it out to the public.

There was an announcement on the official Netflix blog recently, and it’s good news. They’ve been working on adding subtitles to their streaming product, and it’s finally ready to roll out. The bad news is that it’s currently limited to only a hundred titles at the moment, but Netflix has stated that they are working on making it available for all of the streaming titles. It’s also currently limited to PC/Mac streaming, so if you watch on any other platform you’re still out of luck, at least until this fall. Netflix specifically mentioned that Lost, seasons 1-4 have this feature enabled, with more to come.