Venture capital funding picked up in the first quarter to $4.7 billion, from the year ago period, according to both Dow Jones VentureSource and the MoneyTree Report (PriceWaterhouseCoopers and the National Venture Capital Association). Dow Jones says venture funding rose 12% from $4.2 billion in Q1 2009 (the number of deals jumped to 597 from 522), while MoneyTree noted a 38% increase to $3.4 billion (the number of deals rose to 681 from 635). Although deals were up versus the first quarter of 2009, they were down from the fourth quarter– Dow Jones logged $6.9 billion for Q4 2009 and MoneyTree recorded $5.2 billion.

In terms of number of deals, the software industry boasted the most with 144 rounds of funding, according to MoneyTree. However, that represents a relatively low number for the industry— in fact, it’s the lowest number of deals since the fourth quarter of 1995. Meanwhile, VentureSource also noted stagnation in the general Information Technology sector: “IT is losing ground in the venture landscape overall. IT accounted for 32% of the deal flow in the most recent quarter, continuing the downward trend that started in 2005.” 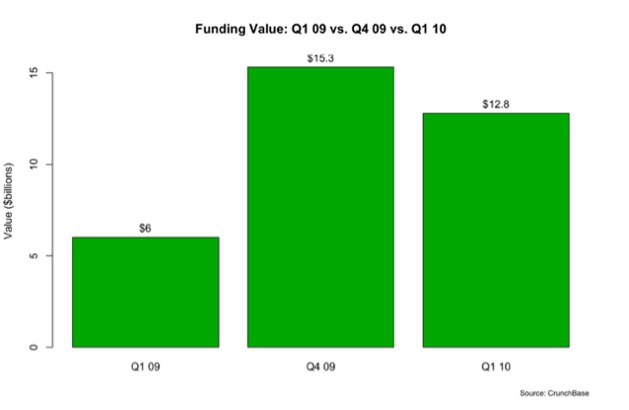 Looking at our Crunchbase data, we have a more bullish take on venture capital funding. According to our data, the total value of venture funding more than doubled to $12.8 billion, from $6 billion for the year ago period. However, as concluded in the other reports, that is a drop from the prior quarter ($15.3 billion for Q4 2009). In total, we recorded 1,201 deals.