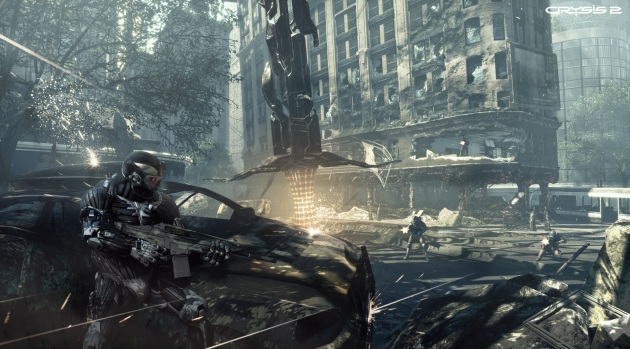 It was only a few days ago that Crytek and EA showed off Crysis 2 to the world’s gaming press—and CrunchGear. It looks crazy, yes, and that finely tuned opinion—”it looks crazy”—is based on the Xbox 360 version. But if we believe Crytek’s business development boss, then the game runs even better on the PS3 than it does the Xbox 360. The games may look identical, or extraordinarily close to it, but the Xbox 360 is being pushed far harder than the PS3. You probably already knew that, yes.

At the moment, we’re getting slightly more performance from PS3 compared to 360. I’m very confident that products using CryEngine 3 are going to come out as the best looking, or at least in the top three, on every platform.

Unless the PS3 version, I don’t know, also washes your laundry, I doubt you’re going to see a huge difference between the two console version of the games. Unlike Final Fantasy XIII, where the Xbox 360 version looks like a 2007 YouTube video compared to the PS3 version.

Not that any of this matters, since we all know the PC version will be the best! There’s a reason I burned a hole in my bank account for the ATI Radeon 5970!

Actually, there isn’t; I just wanted the damn thing for no particular reason.