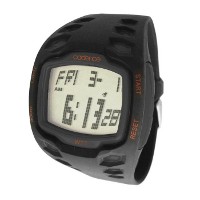 Cadence announced their Wrist Rocket watch today, you may remember we told you about their incredibly cool 4-Bit watch. Well, the Wrist Rocket isn’t quite as geeky, but it’s definitely unique and interesting looking.

It’s a sports watch, but it’s a little larger then your average G-Shock or Ironman. The most interesting feature is the LCD display. Because it’s quite a large piece the display is curved, which makes the dot-matrix display look slightly fluid on your wrist. Retail on the Wrist Rocket is quite affordable $55, and it’s currently available through the Cadence website. I have one sitting on my desk right now, and to be honest the pictures don’t do it justice. Expect a review in the near future.

Cadence designed the Wrist Rocket watch to be a performance sport watch while adding a bold punch with its oversized design. “We found that athletes like big watches because they are easier to read and the buttons are easier to press,” says Vanya Buvac, Cadence’s CEO. Until now the only oversized digital watches available were performance watches with an altimeter, barometer, and compass. These ABC watches typically sell for around $200. The Wrist Rocket however retails for only $55 through Cadence’s website – CadenceWatch.com/wrist-rocket

The Wrist Rocket’s oversized case is complemented by a point of sale display in the shape of a rocket. The rocket is cut out of red acrylic. To develop this POS display Cadence commissioned NextFab Studio, Philadelphia’s new high-tech workshop and prototyping center. “The mission of NextFab Studio is to enable entrepreneurs, inventors, and artists to realize their vision in the fastest and most cost effective manner – by providing state of the art design and prototyping services close at hand, and through membership to our facility, the option of minimizing development cost by doing the work for themselves,” says Evan Malone, founder of NextFab Studio. “The Cadence Watch Company was our first contract customer, and it is thrilling to be able to support such an innovative local business.”