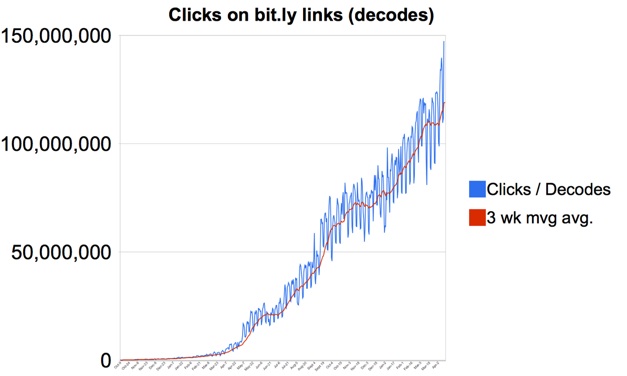 On Wednesday at Twitter’s Chirp conference, CEO Evan Williams released another bomb during the wrap-up Q&A session: Twitter is working on creating it’s own link shortener for Twitter.com. Once again, in the space of a week, Twitter declared it was moving into an area previously occupied by another company in the Twitter eco-system, in this case bit.ly, which grew on the back of Twitter when it became the default link shortener on the service in May, 2009.

I was able to speak with bit.ly and betaworks CEO John Borthwick yesterday about Twitter’s unwinding of their relationship. The impact on bit.ly may be negligible, at least in the short run. It turns out that Twitter stopped using bit.ly as it’s default shortener on Twitter.com back in early December, except for one specific use-case. And even before then, Twitter.com accounted for only about 5 percent of link encodes. Now it is less than 1 percent. Yet bit.ly encoded 3.4 billion links last month and continues to have record days. That is because it is used by many Twitter clients, including Tweetdeck (a betaworks portfolio company).

Borthwick says bit.ly went into the relationship knowing it could be temporary and is happy bit.ly was able to help Twitter during the crucial period last year when it was working through its scaling issues. He reiterates that point in a blog post today:

bit.ly knew this would be a short term agreement — it was done to help Twitter scale and without a doubt it helped bit.ly scale.

It is odd, however, that Twitter stripped out bit.ly before it’s own link shortener is ready. It is even odder that hardly anybody noticed since December. Maybe that is because the power users who would notice don’t use Twitter.com that often.

Nevertheless, Borthwick thanks Twitter for the ride and “for the kick start it gave bit.ly.” He also assures users and observers that “bit.ly is short, sweet and out of control.” No business should be dependent on any one platform, he maintain, and bit.ly isn’t. But he also offers some advice for “platforms” (like Twitter), with a hint of a reprimand:

Borthwick voices the concern of all Twitter developers. They want to know they can build real businesses on top of Twitter without Twitter arbitrarily tuning off the spigot. But he suspects these boundaries will now become much clearer. Once a platform company decides on its business model, it is easier to define those boundaries, he writes. With Twitter finally deciding how it will make money with Promoted Tweets and commercial accounts, those boundaries are being set.