Popbox was one of the stars of CES ’10. It, along with the Boxee Box, will help even more consumers cut the cable cord and tear down the satellite dish by offering a legitimate alternative by binging Internet TV to the livingroom.

Part of the appeal of the Popbox is the Popapps that allows developers to use the full capability of the device including playing back videos and music, viewing pics, and accessing local and network streams — all using Flash. The platform is totally open and developers can now apply for the SDK. 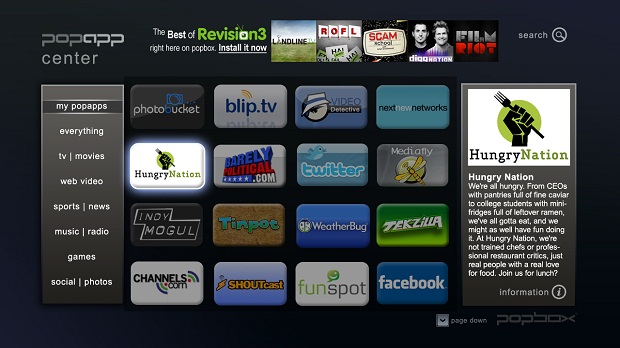 Apps developed with the SDK will be available not only on the Popbox when it launches but also both the Popcorn Hour A-200 and C-200 Network Media Tanks already deployed.

Syabas has made the SDK easy enough that most should be able to get Internet video up and running without too much hassle. There’s even a template included that will help speed up the process. 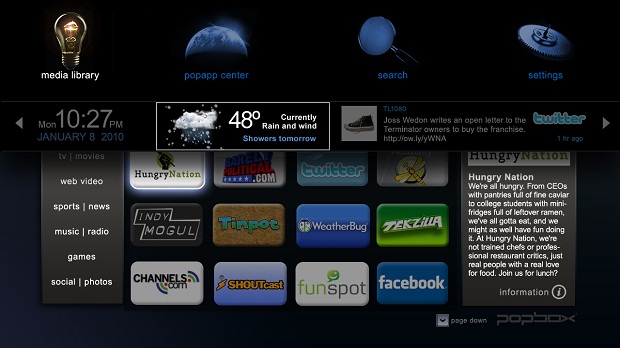 There’s still no word on the exact launch date of the Popbox but this announcement seems to indicate that it’s quickly approaching. The website still lists it as spring 2010 although we were just told it’s going to be this summer instead. People are ready this home media device now.

Popbox SDK Released; Enables Developers To Work With Both Local And Cloud-Based Content To Create New Media Experiences For HDTVs

Fremont, CA (April 7, 2010)—Starting today, popbox invites application developers to begin creating popapps for big-screen HDTVs to deliver internet and locally stored content direct to your TV.  popbox is the connected entertainment device that elegantly plays all your stuff – movies, music, home video, etc. – and all your internet content on your big-screen HDTV.

Released today, the popbox SDK enables developers to take an existing Adobe® Flash® application and easily transform it into a new popapp for popbox. Popapps will be available to consumers directly from their popboxes.  The highly anticipated popbox is expected to ship in the 2nd quarter.

“This is a huge opportunity for the Flash development community to create popapps for the primary screen in the home,” said Alex Limberis, COO, popbox. “Consumers are searching for easy ways to get content to their TV and these popapps can pull data from home computers, the web or even local storage drives.  The possibilities are endless and we can’t wait to see what the community comes up with”

The popbox SDK hooks into the popbox UI to handle remote commands, execute widgets, and load application-specific data. Developers will be able to create popapps that play videos, music, and photos, read and write content metadata, and access files on mounted drives and UPnP servers from the home network or media from the cloud. The SDK also includes a “Showfront” template to quickly publish video to popbox.

“Our viewers are constantly asking us for better ways to watch our 21 HD shows on their big-screen TVs,” said Jim Louderback, CEO of Revision3. “That’s why we’re such big fans, and promoters of popbox.  It’s easy to build a popapp, and the look and feel is first rate.  That’s why we’re excited to be among the first popapps available on the platform, and I know our viewers will be extremely excited about the experience!”

Popbox builds on the success of Syabas’ Popcorn Hour lineup of Network Media Tanks with a more elegant and consumer-friendly user experience, a Flash application environment and the same rabid dedication to beautifully display virtually any multimedia file from the network on an HDTV.  Applications developed with the popbox SDK will be available to popbox consumers at launch through the platform’s popapp Center and can be made available to the existing installed base of over 50,000 Popcorn Hour A-200 and C-200 NMTs already in market.

To find out more, and apply to participate in the popbox developer program, visit www.popbox.com.