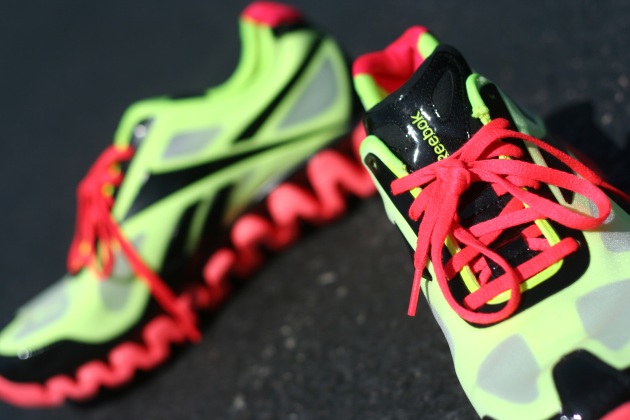 I had myself a bit of a field trip yesterday, going over to Reebok’s fancy gym on Columbus Avenue in New York to try out their new ZigTech shoes. The name alone implies, well, tech, which would explain my presence there. Bonus: I got to interview former UFC light heavyweight Chuck Liddell. Truly an awesome day.

Let’s talk a little about the shoes first: you cannot eat them. I know they look absolutely delicious, but I have confirmed that they are not, in fact, edible. Sorry.

Their raison d’être is that zigzag line you see alongside the bottom. The idea is to transfer the energy that would otherwise be lost as you place your heel onto the ground toward the front of your foot, giving you, quite literally, an extra spring in your step. I have been waiting some 30 hours to write that last sentence.

Reebok had us do some light exercise drills to get a “feel” for the shoes, and I didn’t injure myself or any of my colleagues in the process, so that’s a plus. I’m not exactly a “shoe expert” or anything, but they didn’t feel heavy or awkwardly weighted or anything like that. Presumably with additional training I’ll be able to leap over tall buildings in a single bound!

The shoes are available now for around $100, which is about the average price you can expect to pay for these type of shoes.

Most importantly, I did, in fact, get to interview Chuck Liddell at the event. It was pretty amazing, and I’m very happy that I finally got to see the mohawk in person.

CrunchGear: What do you make of the new Reebok ZigTechs? Have you been using them for a while? They seemed pretty cool for the hour we used them this morning.

Chuck Liddell: I’ve been using them for a while, yeah. They’re really cool. I have a bunch of shoes, actually. My girl was making fun of me because of how many shoes I have. I really like ’em. They’re comfortable, they seem to be working, seem to be helping me move. 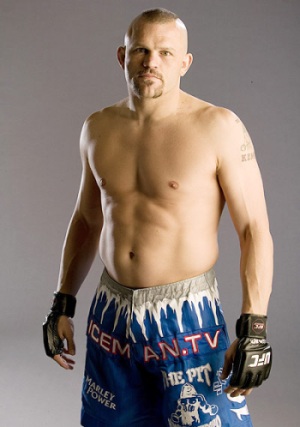 CG: Do you use a lot of hi-tech items in your training, or are you more a back-to-basics kind of guy?

CG: I don’t know. It’s like, you watch TV late at night and there’s so many fancy devices and gizmos out there that promise to make you Superman overnight or whatever…

Liddell: We do a lot of old school stuff. Old school, new school… I mean, it depends on how you want to see it. For us, we’re trying to emphasize the explosive, explosive power over time, you know? I don’t care how much I can lift in one shot. I want to be able to pop, to be able to knock a guy out in less than five minutes. When he [the opponent] catches one of them, I want it to be able to put him to sleep. It’s a different kind of thing.

CG: We’re a tech site, so I guess I have to ask a couple of tech questions…

Liddell: Tech? Well I’m probably not gonna be too helpful there…

CG: Do you have an iPhone? That’s pretty much the extent of it as far as I’m concerned.

Lidell: I have an iPad.

Liddell: Yeah, actually, we’ve been using it quite a bit. [“We” refers to Chuck and his girlfriend, who was sitting next to him. You’ll recall that they were in that Reebook viral video exercising in the nude.] We have it up here somewhere.

CG [to his girlfriend, who’s now jumped into the conversation]: Oh, really? I just asked him if he has an iPhone or an iPad, and he’s the first person I’ve met that actually has an iPad. So it’s weird, not exactly the first person you’d expect to have one.

Liddell’s girlfriend: Yeah, we have it…

CG: What’s your favorite App? Do you guys watch Netflix or whatever on it?

OK, let’s stop the interview for a second to explain what just happened here. As we were all laughing at the absurdity of me guessing exactly how they use the iPad, the little table we were sitting at collapsed. Yes, collapsed, like a house made of hay. Hence Liddell’s girlfriend gasping “Oh, my gosh!” Luckily I was able to catch the table before it fell all the way to the ground, thus preventing a terrible tragedy. Here’s the audio of that part, simply for the lulz…

Audio: I think the table’s broken…

About a minute or two goes by while the table is fixed. I am a hero; clearly I should try out for The Ultimate Fighter next year.

CG: Wow, so you have an iPad, that’s amazing. Did you wait in line for it or do you have connections somewhere?

Liddell: I had a friend pick it up.

CG: Oh, I see. OK, well… I see you’re on the Twitter. Is that really you on there, or is it a manager or publicist or whatever?

Liddell: I answer a lot of questions on there, but sometimes they’re pretty dumb. They’ll ask real personal questions, you know, like, “Hey, where do your kids go to school?”

CG: What a horrible question…

Liddell: Yeah, you know? Or, “What happened to that girl you dated from Bakersfield?” Do I really want to cover that in public? No.

CG: Right. I did see a bunch of people asking you about Tito and your thoughts…

Liddell: Yeah, I’ll send that back. That’s what the fans want. Usually I like to retweet—when people talk shit about me I’ll retweet that. It’s fun to watch the responses, people come up with pretty creative responses.

Liddell: On Facebook I had a guy bugging me, bugging my daughter. It’s like, are you serious? He kept saying stuff about wanting to fight me. Talk all the shit you want, tough guy. But, come on…

Liddell: No, no. I’m pretty easy-going anyway, so you’d have to be a pretty huge dick to bother me. Most guys who would do that tend to be friends of mine, so I don’t know what that says about me. I mean, I worked at bars for a long time, so I’m pretty good at diffusing situations before they become a problem, you know? I know exactly what to say to escalate something, but I know exactly what to say to get rid of something.

CG: So your fight now is with Rich Franklin on June 12 at UFC 115 in Vancouver. Did training camp for that start, and when?

Liddell: It has. It began…

Liddell: Yeah, April 1st is when I actually started camp, but I had a kind of mini-camp when we were filming the show [The Ultimate Fighter season 11].

CG: And that was taped a few months ago, right?

Liddell: Right. We taped that beginning in January and finished up in early March. Then I took a couple of weeks where it was just regular workouts, just to sorta relax a little bit, sorta cool off a little bit. But I’m back in right now. I’m 219 pounds right now, and my goal was 220 by May 1st, so I’m doing good. So I’ve been in shape for a while.

CG: What’s your typical training day? Do you get up for a light jog, or…

Liddell: It depends on the day. Sundays are my day off. Mondays I usually wake up, get a good stretch in, get some sprints in. Then I go work out, then I come back and wrestle. Tuesday I usually go and spar, then at night I’ll wrestle. Wednesdays it’s light, like a hike or yoga whatever just to get my body moving. Thursdays I’m back in. Friday it’s a swim then two workouts.

CG: So an all-day thing. Now, has anything changed that you’re fighting Rich Franklin and not Tito Ortiz?

Liddell: Well, he’s a southpaw, so that changes some things. I do a lot of strategy, so… training partners, sparring, it gets tweaked a little. But it’s a similar fight for me because I’m gonna make him strike with me. He doesn’t have the take-downs to take me down. He’s a better striker than Tito.

CG: What do you make of what Anderson Silva did the other day? A lot of people online were saying, you know, “Oh, he’s this-and-that.” I mean, I’m not a professional fighter, so I’m really not comfortable criticizing someone like Anderson Silva.

Liddell: You know, if he [Silva] was going to clown him [Demian Maia], I would have preferred he try to fight him for three rounds then clown him for the last two, not clown him from the get-go. If you want to clown him for a little bit in the beginning because you felt he disrespected you, fine, but then go and knock him out. But it’s a hard match-up, those guys were trying not to get knocked out. But still, you can’t clown and then run out of gas. I would have liked to see him go after him for two or three rounds, and if he wasn’t out by then then try to clown him. But I don’t know, I don’t know what happened.

CG: It was weird, I guess is the best word to describe it. I guess the last question is, how long do you see yourself fighting in the UFC? Are you gonna keep fighting till [UFC President] Dana White sits you down and says, “Look, stop.” [White had tried to get Liddell to retire last year.]

Liddell: I’m going to keep going till I feel like I’m ready to stop. I still love what I do, I can still beat anybody in the world.

CG: If Dana says “Alright, you’re done,” would you ever consider fighting outside of the UFC, or is that your home?

Liddell: That is my home. We’ll argue back and forth. But at this point, I’m out to show him that I’m back, I’m re-dedicated. I took some time off, I got the fire back and I’m training hard. He’ll see, he’ll see me fight. It’s a fight-by-fight thing for him. But he’ll see, so long as I’m ready to go and I’m healthy he’ll let me go. I think he’s pretty excited to see me back training.

CG: OK, well they’re telling me to get out of here so thanks for your time.

(Note: I don’t know why Liddell’s picture is in the gallery below; it’s just supposed to be photos of the shoes. Oh, wait, I do know why it’s there: because the software we use is complete garbage.)