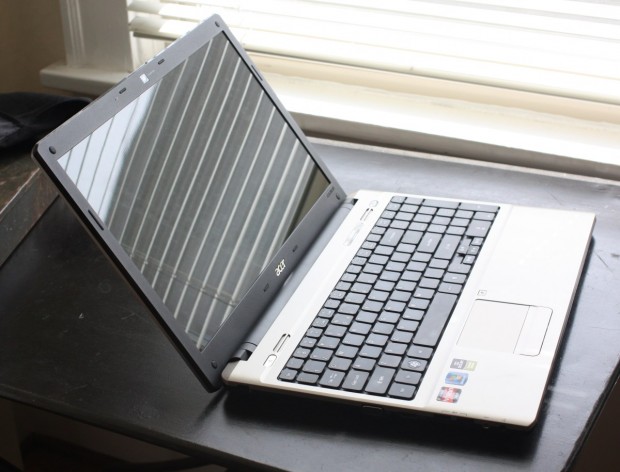 Short version: if you don’t want to spend more than $600 and you must have a 15″ screen, the 5538 is a perfectly decent option, as long as you don’t mind netbook-like performance.

The 5538 is one of the cheapest 15″ laptops on the market. The reason for this is basically that it puts everything into appearing to be a larger laptop than it actually is — which paradoxically allows it to be a little slimmer than those other laptops. Its low-power CPU puts it more in the nice netbook class than anything else, but 4GB of RAM and a 320GB HDD standard, to say nothing of the large screen and multi-touch trackpad, put it quite a distance ahead of the nicest 10″ models. And at $550-$600, you’re not paying much of a premium.

The look being pursued here is obviously the MacBook Pro: black chiclet keyboard, black bezel, faux-aluminum frame, even the signature screen hinge — and it doesn’t look bad at all. It’s a little more than an inch thick when closed, and is generally understated and practical in design. Looks are definitely not something you could complain about here. One thing that bothered me, however, was that the lid does not lock closed. I’d be concerned when traveling that it would constantly be opening slightly and closing, whacking the keyboard every time. Also, while it is certainly sturdy enough, it does feel quite plasticky.

The keyboard is comfortable to type on, though the inclusion of a full number pad pushes your home row pretty far to the left. Keys are well-sized and press easily, though there was something about the undersized arrow keys I didn’t like. The trackpad is extremely far to the left as well. How much these things (don’t) bother you is a matter of taste, really. I’m typing this review 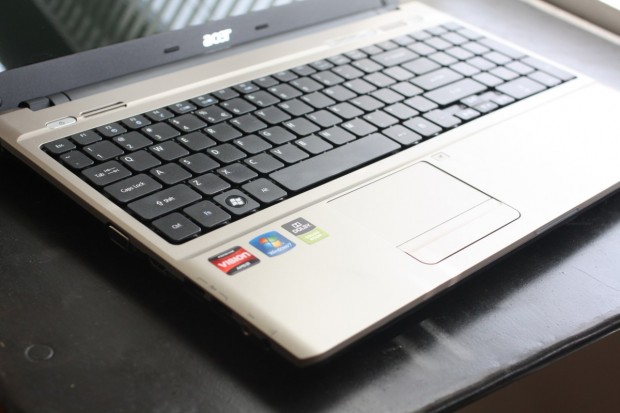 on it (on my lap, where it is balancing nicely) and having no trouble at all. It’s not a light computer, however, but if you’re looking at 15″ models you’re not going to find many that weigh in under 4 pounds.

I was excited to use a multi-touch trackpad on something other than my Mac, and although I was disappointed (as I always am with non-Apple trackpads), it’s not that bad. The scrolling is relatively responsive, thought still not so well-integrated with Windows as I’d like. Get on that, Microsoft! The trackpad tracked just fine, although I found that the bottom 10% of it was unresponsive to touch. Personally, I would ask for a replacement if I received a trackpad that didn’t work across its whole surface. The buttons (or two-ended single button, to be precise) are all right, but there is a pretty big unclickable zone in the middle, meaning you have to hit the left mouse button pretty far over — and remember, it’s already 2/3rds of the way to the left side of the laptop, so for right-handers it’s kind of a reach. 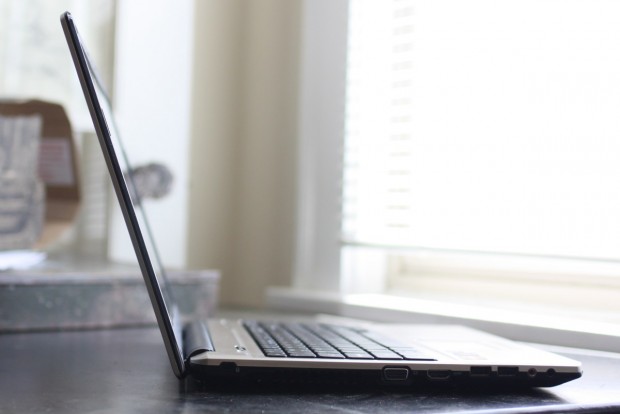 The laptop’s main attraction is its screen, which is decent but not worth shouting about. It’s big enough and high-res enough to watch 720p content if the processor can handle it (depends on codec, bitrate, and player), but brightness and color are only so-so. You can always bump saturation in the settings, though. It’s plenty sharp, however, and the viewing angle is good — the sweet spot is pretty large. For watching DVDs and web video, this would be an perfectly good machine.

Don’t be put off by the processor’s low Hz count — remember that the M11x, ostensibly a gaming machine, was only 100Hz faster than the 5538’s 1.2GHz Athlon, though it was seriously overclocked. The Athlon X2 in this thing does a perfectly good job of running Windows 7, although if I’m honest, with anything at this power level, I’d rather have it running XP really well than Windows 7 passably. The graphics card is nothing to write home about, but should be sufficient for some light gaming; WoW comes to mind, it should be perfectly playable along with games of about that level of fidelity. The “Vision” category the 5538 falls into is “Premium,” which means it’s got hardware transcoding ability. Handy, but I wouldn’t want to work in high-def video with a low-voltage CPU.

The big screen and discrete graphics card do tug at the battery somewhat, though: I got a maximum of about 3 hours. More than enough to watch a Hulu episode in bed or get a little light blogging done at the cafe, but long battery life is not one of the aspects it shares with netbooks.

If you know what you’re getting into, the Aspire 5538 can be a great deal. You can’t expect a lot of power or really any standout features, but if there’s a need for a medium-sized screen somewhere for watching videos or browsing the web, this is a great machine. The touch scrolling is handy, the keyboard is nice, and the screen is sharp, so reading and writing on the 5538 is a joy. Just know that you will bump up against the limits of the CPU and battery without trying. Still, for around $550 it’s a solid deal.