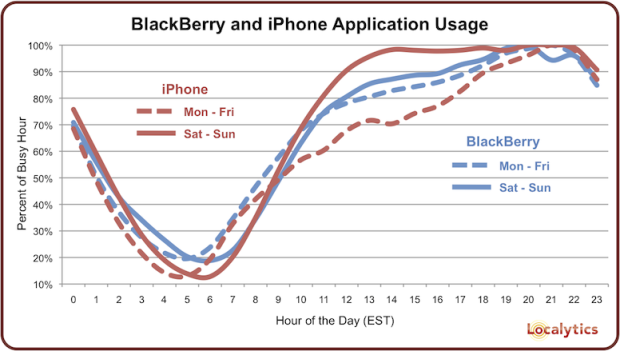 If Localytics’ latest report on app usage raised a few eyebrows here and there with its claims of iPhone app usage peaking at 9PM on weeknights, its latest study results definitely call for far less sensational headlines. But still: Localytics found that Blackberry app usage is still more concentrated and higher during the workday than iPhone, and yet statistically identical to workweek usage on the weekend.

To reach its conclusions, Localytics mined its mobile analytics data from millions of phones in the United States and Canada over two months for iPhone and BlackBerry application usage. The mobile analytics data were summarized by day of the week and hour of the day, and normalized as a percentage of the busiest hour for each.

In contrast to Blackberry app usage stats, iPhone owners appear to use mobile apps more frequently on the weekend with the greatest difference at 2 pm EST when weekend usage is 40% higher than the same time Monday through Friday.

As mentioned earlier, in a previous iPhone analytics study Localytics reported that mobile app usage on the iPhone peaked at 9 pm EST during the week.

Notably, it also maintained peak usage throughout weekend afternoons and nights, with iPhone users generating 7% more traffic on the weekend. Localytics suggested that while the iPhone is making professional inroads, it continues to be predominantly a personal device, contrary to RIM’s Blackberry phones.

Blackberry mobile app usage is clearly higher throughout the workday and starts to peak at 7 pm EST, two hours earlier than the iPhone. More telling, there is no statistically significant difference in the usage of BlackBerry apps on the weekend compared to Monday through Friday, unlike the iPhone.

No shocking revelations, but a solid confirmation of our own assumptions regarding app usage based on analytics.