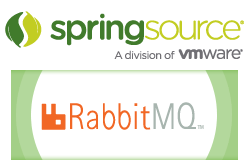 Java application infrastructure and management solutions provider SpringSource, itself picked up by VMware last year, this morning announced the acquisition of Rabbit Technologies, an open source software company based in the UK.

Terms of the deal were not disclosed, but SpringSource says it will add the RabbitMQ open messaging system into its suite of technologies.

The VMware company added that by providing clear integration with the Spring Framework, the community of Spring developers will be able to leverage RabbitMQ as they evolve their applications from traditional datacenters into private and public cloud deployments.

RabbitMQ will continue to be open source software, and SpringSource plans to continue full support for the RabbitMQ developer community.

Rabbit Technologies was founded in February 2007. It is a spin out from LShift, the UK software consultancy and Cohesive FT, the US virtualization and cloud computing company.

This isn’t the first company that was purchased by SpringSource. In August 2009, mere days after its own acquisition by VMware, the company bought Cloud Foundry, a Java platform-as-a-service provider.