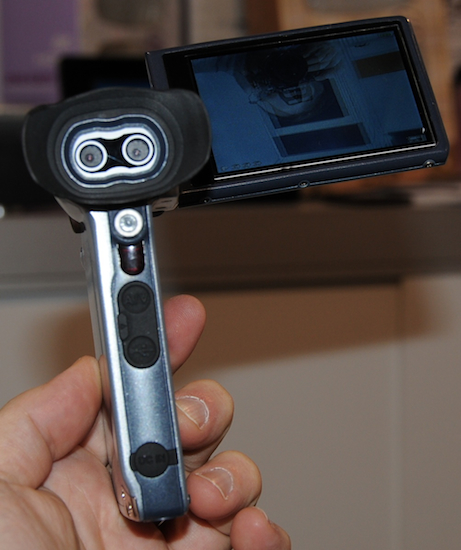 If there’s anything that will get people interested in 3D, it’s themselves. 3D self-recorded memories of the kids playing at the park, Thanksgiving dinner, and… other, less well-lit situations as well. But at the moment, 3D recording is expensive and complicated — DXG aims to fix that. It’s really not that hard to do; all you need is a sensor capable of capturing 60 frames per second, have two lenses offset by a known amount, and then switch off sending the frame information to the right eye and left eye channels. Of course, no one does it because the 3D effect is likely going to be kind of weird.

I mean, the 3D effect in Avatar and such is created by having two cameras (or two virtual cameras) at a certain distance from one another and converging on the point you’re supposed to be looking at. There are parallel approaches too, which use the offset amount between the cameras to change the depth of the 3D effect. This is likely the way DXG has its lenses set up. And although I can’t remember the technical details of it, having the lenses so close together may result in a slightly unnatural 3D effect when you’re shooting stuff at close and medium range.

The DXG-321 will cost $600, and comes with a 7-inch 800×480 screen — enough to show the standard-def video the camcorder is capable of shooting. The little screen has an SD slot (there’s no HDMI out on the camcorder) and produces 3D via a parallax barrier, so no glasses are necessary, although you will need to be right in front of it. They’re talking about marketing through Hammacher Schlemmer, which gives you an idea of the overall quality of the thing. You’ll be ordering the DXG-321 from SkyMall.

It’s kind of exciting, but the standard def thing is a bit disappointing, and of course you’ll need a 3D-capable monitor to edit the video. An HD version is planned for later this year, but by then will we be seeing 3D camcorders from the majors?