Contact manager, Network Hippo, relaunches its site to the public today and rejoins the growing number of social CRMs on the web. The site, which has been in private beta mode, is trying to simplify and optimize the way users organize their contacts across multiple social networks. Network Hippo synchs up with platforms like Facebook, LinkedIn, Gmail and Twitter, allowing users to aggregate all contact data and organize friends within customizable groups.

Several features overlap with other contact managers, like Gist and Plaxo, but Network Hippo tries to differentiate itself by adding layers of social tools to leverage your network. For example, there’s a “Missions” section, where you can launch specific projects like “Add 100 new friends” or “Find a new name for my company,” set parameters for the project (i.e. 100 responses) and crowdsource it to your network. The missions can be set to public or private and Network Hippo will keep you updated on your progress and how much further until completion. 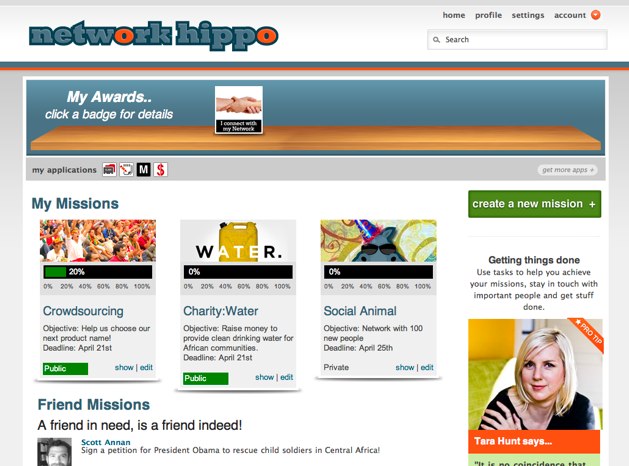 The latest iteration of the site also features a “smart” search engine, according to founder Scott Annan, that will let you sift through your contacts using natural language (like “friends who are writers,” “people who live in Palo Alto,” or “recently added contacts). The search engine is designed to find synonymous terms, therefore if you looked up “friends who are writers,” all your friends who labeled themselves as “journalists” should also appear.

Network Hippo is trying to remake itself as a contact manager for the professional and private user. The site initially launched last September with a focus on small businesses, charging a flat rate of $29 per user. Network Hippo then shifted into closed beta in early February as the team remodeled the site and changed the pricing structure. Today, Network Hippo’s basic service is free to use (with no advertising) but the company does plan to make money from add-on applications. Every user has access to an application library, where you can find a mix of free and premium applications including Mail Chimp, Salesforce and Zendesk.

With just three employees and 4,000 users, Network Hippo knows it’s smaller than its name implies. It may not become the definitive hub for social contact management on the web, but with its simple structure and interesting add-ons it should at the very least influence debate. 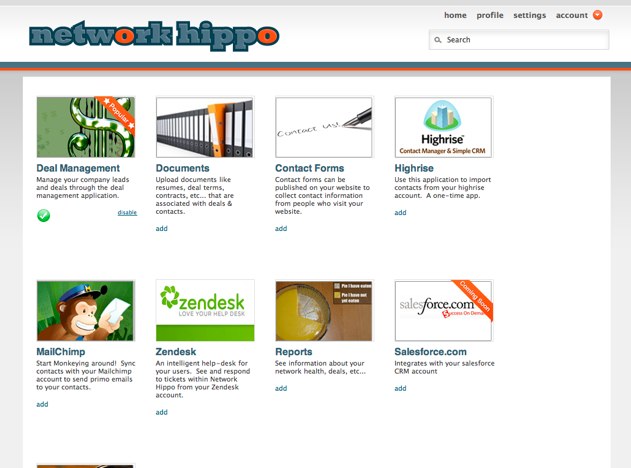