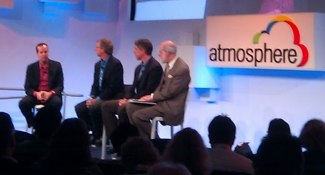 Today at its Mountain View headquarters, Google is holding a special event for CIOs called Atmosphere. The event revolves around cloud-based services like Google Apps and Docs, and Google has an impressive roster of speakers lined up. In a panel called “Google’s Innovators”, some of Google’s most prominent engineers took the stage to talk about the future of the Cloud and a variety of other topics, including HTMl5 vs native applications, net neutrality, and more. My live notes are below.

Q: What are you most proud of seeing during your time at Google?
Alan: Search, Universal search, bringing together images, huge web. Doing that all in one place has been very important to me. And also recency. Our advertising and our publishers — the partnerships we have with them is huge.

Q: What’s the public cloud, what’s the private cloud? Is this semantics?
Vint: It is not just a semantic difference. Private clouds are just as reasonable as private Internets. Companies that make clouds for other companies, are making tools for those companies. The clouds we make here are tools; they’re much more broadly accessible. I don’t see those as in conflict with each other. Inter-cloud interaction is something that’s still very much in the formative stage. There is no vocabulary yet for ‘Cloud A’ to say please move this day to ‘Cloud B’.

Q: Jeff has been responsible for engineering around Google Apps and other systems. Google is known for launch quickly, iterate often. What has Google had to do to reconcile that with the needs of a large enterprise (where you need something more predictable)?
Jeff: We’ve done our best to combine the best of both. There are notable differences b/w the two use cases. Some of the tactical things like delegation of accounts. We do think the model of having a single platform driving this makes a lot of sense. We’ve accelerated our investments in reliability and security. See parallels in consumer world. Default HTTPS in Gmail; login history. Another important area for enterprise — scalable support the organization.

Q: We’ve seen some recent changes with respect to network neutrality. What’s your take?
Vint: In a sense we are very dependent on carriers all around the world. With regard to net neutrality, the term has been vastly distorted. Our concern has been with anti-competitive behavior. Our biggest concerns is not that all packets be treated identically, and it’s not that you have to pay more for certain packets. It’s to ensure that there is a level playing field. So companies providing services will have equal opportunity to allow users to reach the product. If you’re in the business of delivering video for a fee, and were also supplying broadband access, it’s possible you might limit access to a competitor’s video site. With regard to the most recent decision, the way I’ve interpreted this is that the Title I place where the Internet is located for regulatory purposes, didn’t give FCC authority. The side effect of that may be to drive the FCC to relabel Internet service into Title II. As an engineer I’ve felt that the Internet does have a communications component, which should be equally accessible to everyone. in the past when Internet was in Title II, the common carriage rules applied. When you offered access to communications services you had to do it on an equal basis to everyone. I think that a return to that should not be accompanied to all the restrictions of Title II (telephony related things).

Vint: Scaling is a big issue. I’m very proud of Google for implementing IPV6. I see huge possibilities of Internet transmission using wireless. Eg. to broadcast the same thing to multiple people. Interesting thing you could do w/ satellites raining packets of info, like a new update to software when lots of people want it. Identity I also anticipate big things.

Alan: We also have focused on HTML5, which we have a big team working on.

Q: Speaking of that, there’s a reemergence of the conflict between native applications as opposed to HTML5 — can you speak to that?

Alan: There’s always been this application vs the web scenario, which goes back almost as long as I’ve been in the industry. There’s always a gap with what a native application can do given all the resources. I think the interesting thing is that now an application delivered as an application is now accessing the Internet. These apps are now using the Internet as a tool. And with the web have ability to build an application that runs on any device. So there’s a big opportunity between those. But right now there’s a gap between interactivity in an application vs HTML5.The real key is how to close that gap. There’s no reason an internet delivered application can’t be as rich/graphical. But right now there is a gap. We have to address that, which is why HTML5 is so important to us.

Jeff: There is going to be a proliferation of different devices. The app model doesn’t scale well, HTML5 does.

Alan: There’s also a group working on something called ‘native client’. Take code, protect it, and run at native speeds. Once that tech works well, that will raise the bar on what a web delivered application can do.

Vint: I’m excited that the Internet manages to service this variety of things.

Dave Girouard: We want to bring all of Google’s services and make them available to businesses. (Voice, blogger, etc)

Q: What about Google’s broadband plans?

Vint: We want to see what it takes to deliver a gigabit per seconds to deliver that to the user. The real question is what does it actually take technologically, what does it cost. What processes are need to deliver and maintain that capacity. I don’t believe our business model is to replicate that all over the world, but to understand and articulate what it takes to do that. We get told by many others about the cost and difficulties, but this is a way to see for ourselves.

Alan: You may remember we did wireless in Mountain View. The purpose was to see how it went, not to roll it out everywhere. You can’t learn about some things on paper. Sometimes you have to just build it to understand what the issues are.