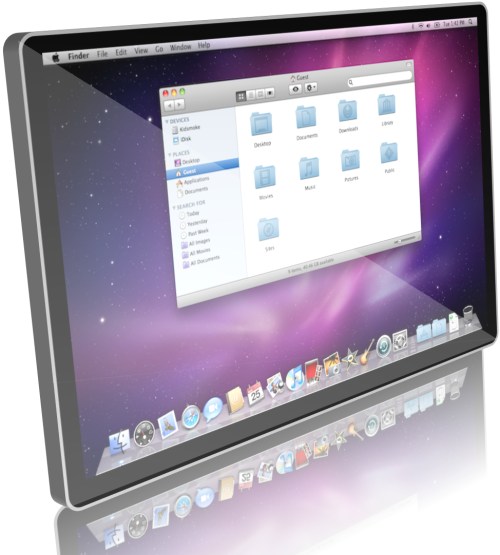 It wasn’t long ago that we were semi-mourning the death of Psystar, distributor of non-Apple Macs. OS X running on non-Apple hardware is one of the holy grails of computing. Others have tried… but will anyone ever succeed? One company (mysterious and, it seems, Illinois-based) claims they have a tablet with netbook specs ready to be loaded with OS X. Axon Logic’s device, supposedly to cost around $500, will have better specs than the iPad, too: they plan on putting a Core 2 Duo in it before long, and it’s loaded with 3 USB ports and a webcam. I can get behind that.

I’ve seen OS X running pretty well on netbooks, but will it play nice in this touch environment? Only one way to find out, but unfortunately that way is specifically forbidden by Apple’s license. You can’t put OS X on foreign hardware and neither can anyone else. I hate it too, but it’s part of the deal. Of course, what Apple doesn’t know won’t hurt them, and if you’re content to live without updates or support, then I think Axon Logic has a tablet for you. Of course, Apple isn’t going to make it easy for them, although they seem to think that including Snow Leopard as a “DIY kit” will avoid legal issue. Hmm.

It’s supposedly coming out “in the next few months,” although the pretty rough concept shown above doesn’t bespeak a project far along in its design process. Maybe they have an awesome design and just don’t want to tell us about it. Or maybe they’re just a little company with a crazy idea that will never get off the ground. Either way, we’ll keep you posted if anything more shows up.