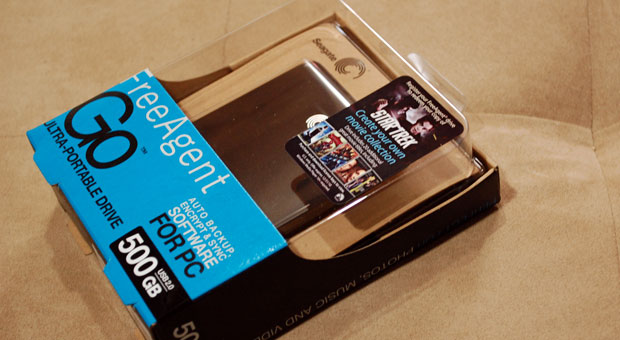 Seagate and Paramount are trying something new. The thought here is to offer consumers an alternative source for movie content and so select FreeAgent Go portable will soon come with 21 of Paramount’s best flicks. But of course these movies aren’t free. Nope, while they are actually pre-loaded on the drive, they cost between $10 and $20 and require a few annoying steps to be used. Still, while there’s nothing wrong with experimenting, this scheme doesn’t seem thought-out and probably won’t spur hard drive sales or stop anyone from downloading illegally — its two main goals. But at least someone is trying something different. Big props to that. 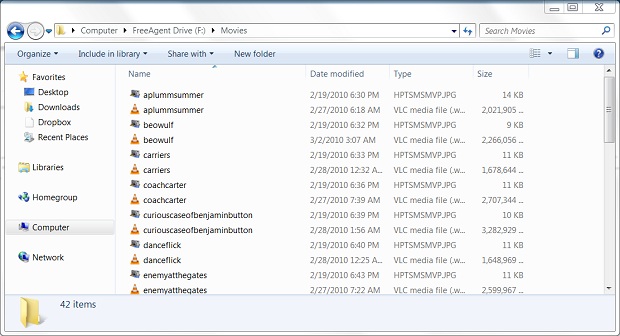 This is what you see when you plug in the drive, two folders — one with the movies, one with some Seagate software — along with a Seagate registration program. The movies folder contains 20 movies along with their cover art. These files are protected by some sort of DRM and while VLC plays them, the picture is scrambled. Users are supposed to login to a website to actually buy the rights to them, therefore descrambling the content. 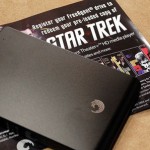 But the process isn’t a fool-proof. First, there isn’t any files on the drive explaining the process. There’s only a small promotional flier that’s included with the drive’s documentation explaining what these movie files are and how to use them. What happens if this small piece of paper is thrown away like most instructional docs? There really should be some sort of included program on the drive that directs users to this website or at least explains how to unlock the video files. Hopefully Seagate has beefed up its phone support because they are likely going to get lots of calls regarding these files.

Okay, so let’s say the user gets past this first step. They still have to create a profile on a Windows and Internet Explorer 8-only website to purchase the movies — of which there are only 21 to choose from so far. 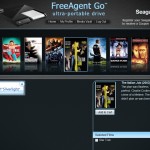 These are good movies, at least by my standards, but they’re also not omg-I-must-buy this-drive-to-own-these-type of flicks.

The drive is supposed to come with a promo code to unlock the new Star Trek movie. I can’t figure out how to use it. The code doesn’t seem to do anything and I’m not spending $20 on the 720p movie just for this post. Sorry, I’m a starving blogger. The press release however states that “The films will be licensed for multiple devices to allow for portability and enjoyment of them on a desktop computer, laptop computer, or widescreen television, using the FreeAgent Theater+™ HD media player.” Don’t expect that much portability, though. These files are locked down.

It’s clear that both companies involved are at least trying to provide consumers with a legitimate storefront for digital media. That’s great. A good amount of consumers want to follow the rules and not download illegal content. But at least this implementation doesn’t work. It’s clunky requiring consumers to bypass needless hurdles while only offers a tiny amount of content at a high premium. Back to brainstorming, boys. Let’s try again.