The flash sales space is growing rapidly, with Gilt Groupe , Vente-Privee, HauteLook and others seeing millions of consumers flocking to their sites. There’s even a sample sale aggregator, MyNines, that’s joined the mix. A new player is joining the online sample sale space, called Mintbox, that aims to give users rewards and cashback for shopping on the site. You can sign up for the Mintbox here.

Similar to other flash sales sites, Mintbox offers discounts of up to 70 percent on luxury goods. But Mintbox aims to reward the consumer for shopping on its site. The startup partners with designers and retailers to offer extra benefits to members. For example, Mintbox members may get access to order merchandise before it arrives in stores through VIP trunk shows or access to New York Fashion Week shows. Then, early in the season when new merchandise hits the floors, Mintbox members may receive a 20-30% discount.

Mintbox members will also receive exclusive invitations to private shopping events, designer previews, tickets to Fashion Week Shows and other exclusive fashion experiences. During February 2010 New York Fashion Week Mintbox members got sets of tickets to attend top designer fashion shows at Bryant Park. And Mintbox is partnering with credit card companies to offer 5 percent cash back deals, which are funded by the retailers, for members.

Essentially Mintbox bridges a loyalty program with flash sales. And the site is designed to help retailers bring traffic into their actual stores by offering in-store private sales and invitations to events. In the future, Mintbox will be allowing users to donate cashback rewards to charities and is currently working on developing mobile apps for its platform.

Co-founded by former fashion executives and consultants, Mintbox will face competition from the host of luxury-goods focused flash sales site on the web, including Gilt, RueLaLa, and others. And many of these site offer incentives for shopping on their sites. For example, on many of the sites, you can earn a status that allows you to access sales earlier than other members. But Mintbox takes the rewards programs to a different level by also trying to create loyalty for retailers and designers, which is sure to make its platform attractive to some. 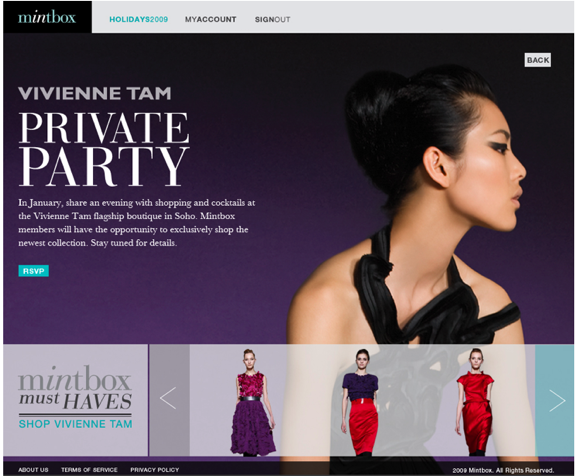