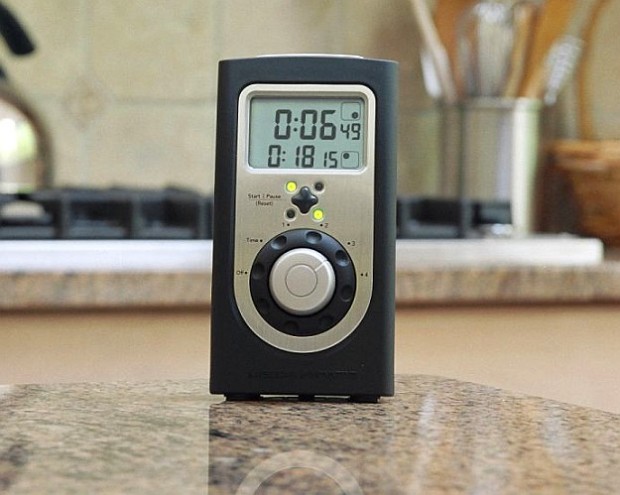 Adam Hocherman, 34, is an entrepreneur and founder of the consumer electronics company American Innovative in Boston, MA. Adam founded the company in 2003 with the help of the US Government’s SBA loan program and is currently the 100% owner. He holds a BS in Mechanical Engineering and an MBA, both from Cornell University. Adam’s writings can be found on his blog at DesignTheatre.net and through his Twitter feed. He welcomes your comments. Read more about sourcing in China here.

Read Part 1 of this series.

I am sitting in the lobby of the Royal Plaza Hotel in Mong Kok waiting for the owner of the factory that makes our Neverlate and Quad-Timer items to pick me up. The final legs of my journey were largely uneventful although it was nearly 2am local time before I finally closed my eyes to go to sleep last night. Dealing with the jet lag on the way out is easy. I basically stayed awake the entire time, dozing in out of a half-sleep the way that someone who is over six feet tall does on airplanes. Some five small airplane meals later, I had lost track of what meal I was supposed to be on. Acclimation to the time zone on the way back is much more difficult and if you’ve ever been to the International Pavilion at the CES you can attest to this first-hand through the observation of countless sleepy Asian booth attendants nodding off in uncomfortable plastic rented chairs.

Before I continue where I left off from last time, I’d like to pause to address the question that was the inspiration for writing this article. That question is why? Why “go it alone”? Why take the route that I’ve taken rather than license your idea (actually, let me be more specific – your product concept) to another party? I am of the opinion that there is a place for licensing, but it is not for low cost – say, sub $100 – consumer products. If you have a proprietary technology – something that you embed in another product then, by all means, license it. If you have an idea for a consumer product and the desire/willingness to put for the effort to bring it to market, then you should go it alone. The reasons are many, but the main ones are (1) IP, (2) margin and (3) control. Let me speak to these one at a time.

1) IP, or intellectual property. There are proponents and critics of the US intellectual property process and I would definitely fall into the category of proponent. That said, I know first-hand the realities of obtaining a strong US patent for a consumer-type device. Anyone can file for and receive a utility patent but there is a vast chasm between that and receiving a utility patent that is useful or, in patent parlance – “strong”. If you plan to license your device, then at a minimum you need a stong patent – one that is defensible in a court of law. While you may not be able to read and make sense of the claims for a utility patent, you may rest assured that counsel for the company you are attempting to license your concept to can and will. Aside from the fact that patents are time-consuming to write, and ultimately expensive to file, many great product ideas simply are not patentable in a manner that will serve the end that you have in mind. Take, for example, a very cool toy that I saw while mining for new ideas in a Hong Kong Toys ‘R’ Us store. It’s a children’s train set similar to the wooden track toys of my youth. What’s cool about it? Instead of plastic or wooden track, it came with a pulp-maker and a set of press molds. The child grinds up newspaper and makes pressed track sections using the kit, which are then assembled for the battery-operated train. Is it a brilliant take on a new “green” toy? Absolutely. Is the idea of molding paper pulp into train tracks patentable? In the eyes of the USPTO probably not or, at best, very very narrowly (i.e. a patent that the inventor of this toy might be granted will probably not be broad enough to protect against a host of similar knock-offs).

2) Margin. Speaking now from the perspective of the licensor – product margins on consumer electronic products are thin. Manufacturing costs continue to rise, consumers (that’s you!) continue to demand rock-bottom prices and retailers remain stubborn in maintaining their, often very aggressive, margins. The result is that the guy in the middle gets squeezed. There is more room in some product segments than others but for electronics it can be hard to make the numbers work. As such, the idea of handing over an additional percentage to a product entrepreneur who walks through the door with not much more than an idea (and this happens to me once or twice a month) is not very attractive.

3) Control. Licensing an idea necessarily means relinquishing some degree of control over its final implementation. And that’s fine for some but not for me and maybe not for you. After all, your product is your baby and no one else is going to develop it in just the way that you want. I respect what Chris Hawker did with his PowerSquid product (see related CrunchGear series). In fact, it was his article that inspired me to reach out to CrunchGear. However, you need only read his series to get a feel for the pain that he experienced. While ultimately successful in his endeavor, it wasn’t clear to me that Chris felt very satisfied with the end result. It may have just been my interpretation of his story but I got the feeling that had he to do it over again, he may have tried his hand at bringing the PowerSquid to market independently.

Now all of this is not to say that doing it my way is all a bowl of fruit. It definitively is not. One nice thing about licensing that is not true of bringing a product to market on your own is that someone else manages the marketing, sale, customer service, accounting and logistics of your product once it is “done”. Albeit at a great cost, but it is one way to see your idea come to fruition without having to spend the rest of your life dribbling it up the court, as I must.

So what exactly, you must be asking by now, is involved with sourcing this thing yourself? Ultimately what all of this productizing boils down is execution. What I mean by this is the “putting of the one foot in front of the other”. There are lots and lots of little steps involved and it takes a detail-oriented demeanor to get it done right … to get it done at all, in fact.

Alright, back to the task at hand. One step at a time. When we left off at the end of the previous installment, you had a “long list” of possibly appropriate factories that you located on GlobalSources.com and a decent product specification. Hang onto your product spec for the moment. The next step is to blast off an RFQ to the members of your long list using the automated features of GlobalSources.com to do so. The automated RFQ (or you can manually email to the listed contacts, if you prefer) is a teaser.

The form fields will ask you to describe your project and you should do so at a high-level. Be sure to clarify that you’re not looking to purchase and private-label an existing product that the manufacturer produces but that you have an OEM project (a custom, ground-up design) that you’d like to discuss.
Your RFQ blast should result in a decent response rate. You’ll typically hear from one of the company’s marketing or project managers. This is typically a young woman (but not always) that has a good command of the English language and a decent grasp of the technical process behind developing a custom product. She is the liaison between you and non-English speaking members – management and/or engineering – of the factory. She may even ultimately be your main contact for the duration of the project, depending on the factory.

Next you want to request that the factory sign an NDA (Non-Disclosure Agreement) before you send over your product spec. Get one off the internet. The NDA is basically non-enforceable, in practice, but you should send it anyway. The factories know this, but sending the NDA (a) makes you appear serious about your idea and the protection of your IP – which you are and (b) is a handy way to take a first pass at eliminating factories that are not serious about working with you. This small bit of admin will quickly separate those that are genuinely interested in hearing more from you from those that aren’t.

If you started with 12 factories on your long list, you’re probably now down to five or six. Send these factories your product spec attached to an e-mail describing your interest in working with them. You should reasonably expect two to four legitimate quotations to result from the dialog that remains with the factories that signed your NDA. Some will determine that they’re not a good technical fit for what you’re after, others will simply lose interest. Along the way they’ll ask you questions that you don’t know the answers to, like: What will be your initial order quantity? What’s your target FOB cost? What does FOB stand for anyway? (they won’t really ask you this, but you should know). These are all questions that are elusive to a first-time product designer, but questions that have easy answers … perhaps in the next installment that I write?