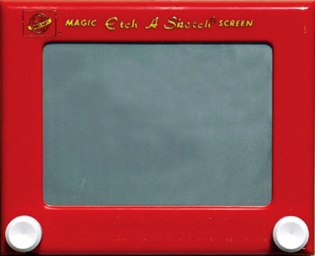 Thirty five years ago, give or take, I was presented with my first etch-a-sketch. And it looked a little bit like the iPad. Which makes me qualified to declare the iPad the future of media.

Or at least, that’s the logic of an article in today’s Guardian by Alan Rusbridger, who says that a block of wood that he saw sixteen years ago showed him the future. And that future was the iPad.

“My personal journey to the iPad began around 16 years ago in Aspen, Colorado,” Rusbridger begins. He saw a website showing a newspaper online and was duly impressed. “But the real excitement lay in Aspen, where the Knight Ridder newspaper chain had set up a “laboratory” to study the future of news. It was rumoured that they had built a “tablet” – a portable screen on which people could read newspapers.”

The tablet he saw was a block of wood with a printout of a newspaper glued on the front. No, I’m not kidding.

“At present it consists only of an A4 block of wood, with a ‘front page’ stuck on it: the technology for creating Fidler’s ‘Flat Pad’ is, he estimates, still a couple of years off.

And the iPad finally fulfilled that dream. “Here it was – the Aspen block of wood incarnate!” says Rusbridger when his iPad arrived.

The iPad Will Not Fix Your Newspaper

Rusbridger then goes on to talk about how perfect the iPad is to consumer the Internet (no disagreement from me on that point). And he suggests the iPad might be the knight in shining armor who rushes in to save the day for newspapers: “So is the iPad the future of newspapers after all?”

Seriously, that’s as far as the argument goes.

But jumping back to reality…the iPad changes everything, which really means nothing has changed. All the pressures the Internet put on newspapers – crushing the business model, unlimited competition, no need for tree massacres – are just amplified by the iPad.

Now would be the time to embrace the Internet. But the New York Times, the Wall Street Journal and other are running in the opposite direction with apps that have no hyperlinks and/or require a fee to get access. All those people sitting on trains with their iPads are going to do the same thing that all those people sitting in their offices on their laptops did – get their news from free sources that hyperlink to other free sources.

The etch-a-sketch was very, very cool. But it didn’t give newspapers a competitive advantage and a way to stay alive a little longer. And neither does the iPad.